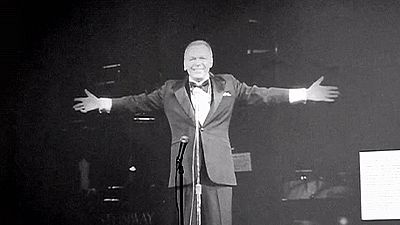 ‘Sinatra: An American Icon’ is an exhibition at the GRAMMY Museum in Los Angeles, celebrating the life and work of the iconic American singer and actor Frank Sinatra. He was one of the most popular and influential musical artists of the 20th century, having sold more than 150 million records worldwide. He died in 1998.

Bob Santelli, Executive Director of the GRAMMY Museum, curated the exhibition with the co-operation of the Sinatra family:

“We got most of the artefacts that you see here, probably as much as 90 percent, from the family, from the family archives. Almost all of them have never been on display before. In fact, there’s never been a Frank Sinatra exhibition other than photo exhibits in the past so this is the very first one, maybe the only one.”

Among the exhibits are his gold and platinum records and awards including three of his nine GRAMMYs, his Oscar for the 1945 short film, ‘The House I Live In’ and his Golden Globe for Best Supporting Actor in 1954 for ‘From Here to Eternity’. Sinatra starred in more than 60 films in his career and produced eight movies

The exhibition traces the Sinatra legacy from his birth in Hoboken, New Jersey to his music career, Hollywood success and artistic talents. But it’s also the story of the man behind the legacy.

“I never knew until doing the research for this exhibit how much of a social and political activist he was,” said Santelli. “This was a person who understood that with his celebrity status he could help change things or at least have Americans look at some of the problems we were facing in a different light.”

For many music critics, Sinatra’s popularity is today matched only by Elvis Presley, Michael Jackson, and the Beatles. The exhibition ‘Sinatra: An American Icon’ runs at the GRAMMY Museum in Los Angeles until mid-February.