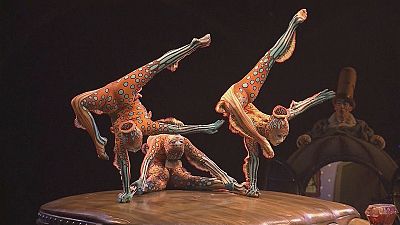 Cirque de Soleil’s spectacular show ‘Kurios-Cabinet of Curiosities’ draws a rapt crowd for a performance at the Dodger Stadium in Los Angeles.

We play a lot with the proportions and with the perceptions, so you see it's a very magical world

Close to 1.2 million spectators globally have had the chance to view the Cabinet’s magical realm, where an ambitious inventor defies the laws of time, space and dimension in order to reinvent everything around him.

The visible becomes invisible, perspectives are transformed, and the world is literally turned upside down

Speaking in LA, director Michel Labrise promises that there some surprises in the latest production of the long-running show.

“You’ll see there’s a lot of new things, the set is different, the performances are different. There are some performances that are not acrobatic, they are more like other human performances, like hand puppetry,” Labrise explains.

“We play a lot with the proportions and with the perceptions, so you see it’s a very magical world. But also what people have told me that it’s the first time that they see real characters, real people on the show.

“So you have people with real hats, jackets, suitcases so the audience can really identify to the characters which makes it a very emotional show.”

The show runs at Dodger Stadium until 7 February, before heading to Atlanta, Boston, and Washington.