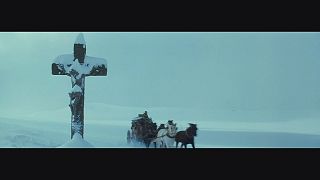 It wasn't anything you couldn't handle, it just wasn't like doing a movie on the beach

During a blizzard, an odd bunch of violent strangers end up in the same Wyoming refuge. One thing is certain: not everyone is going to make it out alive.

It’s Tarantino’s first movie since his 2012 hit “Django Unchained,” and his eighth so far. The acclaimed director plans to make two more before he steps away from the camera.

“I don’t make a movie every year, so probably we’re talking about eight years from now,” Tarantino said at the film’s premiere in Los Angeles. “It’s not like I’m going to live in a house by myself. I’ll probably write novels, or write theatre and direct theatre, we’ll see.”

It was shot last winter in Colorado and on a sound stage the crew compared to a freezer.

“It wasn’t anything you couldn’t handle, it just wasn’t like doing a movie on the beach,” said Russell.

Jennifer Jason Leigh says #HatefulEight, #Anomalisa are “two of the best roles of my life” https://t.co/PoVk9NOpz8pic.twitter.com/pE9Fkd63Wu

“The Hateful Eight” opens in U.S. theaters on Christmas in a special 70mm release and will hit the big screens worldwide early next year.

Here are eight things we learned at the premiere for Tarantino's “Hateful Eight.” https://t.co/sP6eIiv641