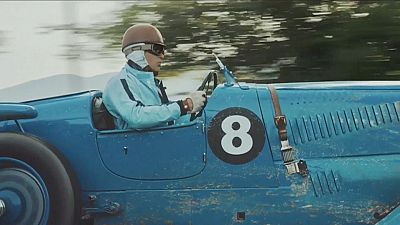 Following the success of their last brand film together, actors Jude Law and Giancarlo Giannini are teaming up again for an advert for a well-known whiskey label.

Last year, the pair made a bet on a boat. This time, they enter another gentleman’s wager over a vintage car that takes Law on an epic journey from Southern Italy to Monte Carlo.
The film shows that it is only through the gratitude he shows people who help him along the way and the joy this brings him that he is able to succeed.

Asked whether he actually got a chance to enjoy the landscape during the shoot, Law said no: “Luckily, I’ve driven through Italy several times before because I was so nervous about this car stalling or doing something wrong and it was also very hard work, it was a very intense drive because of the way it’s been built – the shape and the space you have. So I wasn’t enjoying the scenery while I was driving the Delahaye, no, not particularly. I was concentrating on keeping it going more than anything,” said Law with a smile.

Nothing was spared for the film with Chinese actress Zhao Wei and Formula 1 celebrities Mika Häkkinen and Jenson Button among the star-studded cast.

The hope is to create at least as much of a buzz on social media platforms as with the first short film, which received more than 45 million online views.

More than twenty years after the movie hit ‘Indecent Proposal’ starring Robert Redford as a billionaire who offers Demi Moore’s character one million dollars for spending a night with him, it appears everyone has a price.

Casino tycoon James Packer proved it when he paid a reported 13 million dollars each to film director Martin Scorsese and movie stars Leonardo DiCaprio and Robert De Niro for endorsing his new gambling mecca in Manila.

And British luxury brand Burberry is also hoping its new short film will help create a buzz around the label ahead of the busy Christmas shopping season.

Marking 15 years since the release of the iconic British movie Billy Elliot, the brand has recreated the opening scene of the film, where Billy bounces on his bed to the sound of T-Rex’s Cosmic Dancer.

The 3-minute film had its very own London red carpet premiere, attended by a host of British celebrities who took part in it, including Elton John, James Corden, Naomi Campbell, Julie Walters – who starred in the movie as Billy’s dance teacher – and David Beckham’s son Romeo.

“‘Billy Elliot’ is a film that was very important for me as I was growing up and my nieces and nephews growing up, and for many of us around the world, I love the story of somebody who, despite everything, succeed because they follow their passion because it’s inside of them, and along with that we wanted to make sure we were doing some good for the world as we created this film,” said Burberry CEO Christopher Bailey.

The label has announced it will donate £500,000 to split between charities that work on reducing barriers to education, training and employment.