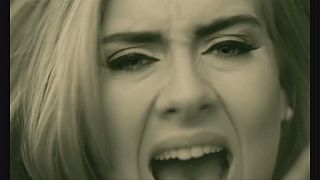 Debuting at no. 1 on the US Billboard Hot 100 and top of the singles charts in the UK, it has also set a mark for the record industry in the digital age becoming the first song to sell more than one million U.S. downloads in a week.

‘Hello’ is the first single from Adele’s upcoming album ‘25’ due out later this month.

With his latest single ‘Sorry’ at Number 2 and his previous hit ‘What Do You Mean?’ at Number 5, Canadian heartthrob Justin Bieber boasts simultaneous top five hits. His new album ‘Purpose’ is due out next week.

Country music queen Carrie Underwood premiered her new album, ‘Storyteller’, at Number One, making her the first artist in country music history to send all six of her records to the top of the charts during their first week of release.

And a capella group Pentatonix scooped up their first Number One album on the Billboard 200 as their new self-titled LP – the first to feature entirely original content – narrowly captured the top spot in its debut week.

The Grammy Award winners are also releasing an expanded deluxe edition of their platinum-selling holiday album, ‘That’s Christmas To Me’, featuring 4 new tracks.