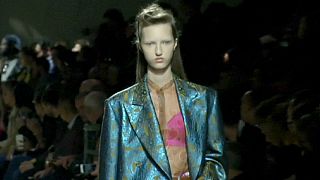 Dries Van Noten’s latest Spring/summer collection was a feast for the eyes on day two of Paris Fashion Week.

The Belgian designer chose an industrial hangar to show off his latest collection with music by the avant-garde string quartette Bălănescu and was served up in his signature eccentric style.

“The idea was to do it sophisticated and raw at the same time so bicolour prints, or two tone prints that when you clash them together they make an even bigger shock than when you have multicoloured things. She wears underwear on top of her shirts, and things like that so she has skirts with far too much tulle inside in the skirt. She wears during the day all these things.”

Embroidered coats were matched with ankle length trousers, and clashing colours. Patterned gloves climbed up models arms, a nod, said Van Noten to the 1940s. The look was completed by chunky block heels, to be worn by a woman the designer described as ‘flamboyant’.

It marked the second outing for American-born London-based designer Adam Andrascik for Laroche.

‘Trouble in Paradise’, was the theme for the show which featured bold khaki coloured trench coats and trousers off-set by golden appliques of palm trees and sunsets.

Miniskirts were adorned with chunky chains, while deconstructed biker jackets revealed shoulders. Paying tribute to the brand’s androgenous roots, the tailoring tread the line between masculine and feminine.