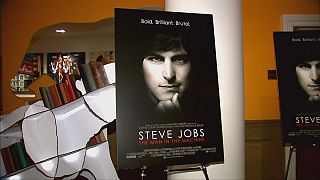 ‘Steve Jobs: The Man in the Machine’ is a new documentary that takes a look at the Apple co-founder’s career and legacy.

Alex Gibney, a prolific Oscar-winning documentary maker, who has also made films on the Scientology church and Wikileaks, says he chose Jobs as a subject because of the contradictions inherent to his iconic status.

“I think he has a kind of mythical hold on our imagination so I think he’s an important character. And he’s an important character for us to understand and get right. Both what he did is great and what he did that was not so great, because I think because of his success people like to feel that, ‘Oh well, we should emulate everything that he did.’ Well I hope we don’t, I think we should emulate some things but not a lot,” says Gibney.

The movie starts with people’s reactions to Jobs’ death in 2011 and proceeds to tell the story of Job’s passion and what some called greed.

The engineer who helped create the Mac, Bob Belleville, can be seen breaking down as he describes the toll it took on his personal life, and Jobs’ own daughter describes her father as remote and lacking in generosity.

“Apple has not been happy, but they weren’t happy from the beginning,” Gibney explains. “You know, I went to them first, right off the bat, and said, ‘Could you please cooperate?’ They said, ‘We don’t have the resources to help you on this.’ Which I found amusing from the world’s most valuable corporation.”

The film has received mixed reviews with some calling it an Apple Hater’s Manifesto while others describe it as a riveting and important corrective to the myths Jobs helped to propagate.

‘Steve Jobs: The Man and the Machine’ is on limited release in North America and available on video on demand.