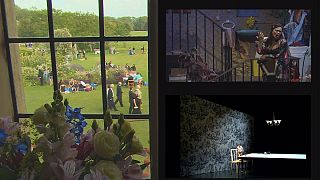 At the Glyndebourne Festival,in England one of the highlights of this summer’s edition was Ravel’s L’enfant et les sortileges and “L’heure espagnole”. Staged by French director Laurent Pelly. Enchanting soprano Danielle de Niese was the unrivalled star of both operas.

You have to have a little bit of the sass.... a fiery flame like, a spirit of a Spanish woman; so this to me was quite important to remember, so that we didn't get too French!

“That’s what really makes me think this could be quite interesting to do: both a femme fatale role and an androgynous little boy in the same evening,” said de Niese.

“I think ‘L’enfant et les sortilèges’ represents the primitive nature of the child. They’re learning still how to be in society, which is why when a child doesn’t get what they want they can roll around on the ground, and stamp and cry, in a way that we adults know better than… (well, most of us do)… to have temper tantrums. It’s the morality of the objects in his room that come to life to teach him about… love.”

For French stage director Laurent Pelly finding the rhythm of the piece is key: “It’s a very short opera, I think the longest scene probably lasts one and a half minutes, two minutes at the most; and it has a sort of dreamlike atmosphere. In my opinion, when shifting from one scene to the other, the secret in a piece like this is to be able to be abrupt at times and, at others, fluent and light.”

Glyndebourne is also world famous for its picnic during the long interval. It is in the grounds’ stately home that Danielle de Niese lives with her husband, Glyndebourne’s owner and chairman, and their newborn baby boy, Bacchus.

“Of course, having a baby three weeks before rehearsals began, presented another physical challenge,” she said, “because I already knew there was going to be a transformation in place between Concepcion, the heroine in L’heure espagnole, and “L’enfant” to learn how to take away that which makes me feminine and employ that which makes me a young boy, but then, coming to rehearsals with a body that has been so drastically changed from birth, has presented a sort of triple challenge for me!”

L’heure espagnole, a musical farce set in Spain, tells of Concepcion, a sexually unfulfilled woman who tries to meet her lover at least one hour a week.

“I went into the rehearsal saying: ‘I want to make sure that I’m doing a French-spoken piece by a French composer but I’m a Spanish woman!” declared de Niese. “So you have to have a little bit of the sass…. a fiery flame like, a spirit of a Spanish woman; so this to me was quite important to remember, so that we didn’t get too French!”

“In ‘L’heure espagnole’ the characters are an integral part of the clock-shop,” added Pelly, “so, it’s always amusing to use the ‘picturesque’ element of the music to create movement; there’s almost nothing in the show where movement doesn’t go with an idea created by the composer Ravel.”

The next edition of the Glyndebourne Festival will take place 21 May-28 August 2016. The 400th anniversary of William Shakespeare’s death will be marked with productions of Berlioz’s “Béatrice et Bénédict”, and Britten’s “A Midsummer Night’s Dream.
Now playing Next
musica