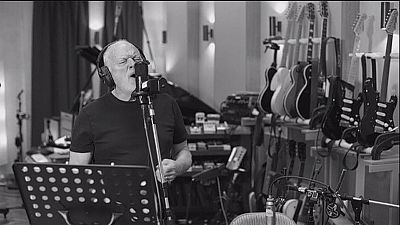 ‘Rattle That Lock’ – the title track from his fourth solo album – samples the chime from the SNCF train announcement.

“‘Rattle That Lock’ was inspired musically by the sound that’s played on French railway stations before they make an announcement. It’s a jingle, a four-note jingle that’s played, and every time I heard it it’d make me want to start dancing. I was in Aix-en-Provence station visiting friends, I heard it as you often do. So I then turned my iPhone on, held my Phone up nearer the speaker and waited for the next announcement, took that sample from that and that’s what I’ve used for this track,” he explains.

Armed with the jingle, Gilmour worked on the lyrics with his wife and longtime writing partner Polly Samson. The result is a nine track album produced in collaboration with Roxy Music’s Phil Manzanera and pianist Jools Holland, which be released in September to coincide with David Gilmour’s European Tour.

At 69, the legendary guitarist also continues to play an active part as a member of his legendary band. In November last year, Pink Floyd released their 15th studio album, ‘The Endless River’, a tribute to Richard Wright, one of the band’s founding members, who died in 2008.