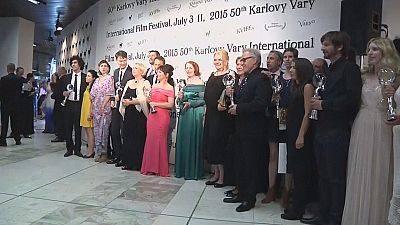 The Crystal Globe for best film went to ‘Bob and the Trees’ by US based French filmmaker
Diego Ongaro.

The film features non-professional actors and tells the story of Massachusetts logger Bob Tarasuk who plays himself.

The director, Diego Ongaro spoke about Bob:
“I met Bob eight years ago so before picking him as an actor in my film we became friends because I live in the same town as him and I was really attracted to his character, his personality, his charisma and I just knew I wanted to make a film with him and it would be about logging because he’s a logger and a forester.”

Bob Tarasuk was as surprised as anyone:
“I have never acted in my life, the director just saw something in me that he felt was special and it ended up really special, “ he said.

The Crystal Globe for best director went to the Kosovan filmmaker Visar Morina for his drama ‘Babai’.

Set in Kosovo and Germany the film follows the relationship between Nori and his father Gezim.

Until Gezim leaves to seek work in the West.

Director Visar Morina spoke of the difficulties of filming with a young boy: “During the shooting we had many challenges because our main part is a child, we were shooting on water, we were shooting in three different countries with animals, with everything, but I was very lucky with the crew.”

Karlovy Vary’s flagship East of the West competition was won by ‘The Wednesday Child’ by Hungarian director Lili Horvath.

As a nine-year-old, Maja was abandoned by her mother and placed in an orphanage. Now ten years later and she keeps returning to the institution, to visit her own four-year-old son.

Lili Horvath is the film’s director:“The movie is the portrait of a young woman who is a self destructive person and stays nevertheless likeable throughout the film, I guess.”

The best documentary prize went to Czech filmmaker Helena Trestikova for ‘Mallory’:https://youtu.be/HXgx6e19uyo, a study of the life of a woman on the edges of society.

The Special Jury Prize was awarded to Peter Brunner’s Austrian film ‘Those Who Fall Have Wings.’

THE SNAKE BROTHERS is competing for the KVIFF Crystal Globe. The Austrian premiere will follow at LET'S CEE FF. https://t.co/ML0XpHwfKc