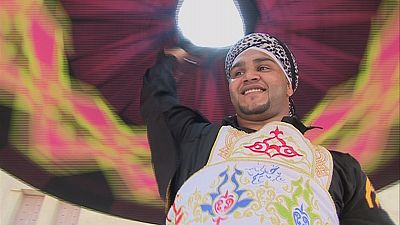 A celebration of the three monotheistic religions in Egypt, that’s the main idea behind the Daraweesh Carnival, a festive and colourful event which took place on Friday, June 12 in the streets of Old Cairo.

I am happy with what I saw today, I got to know people, made some friends and saw dances for the first time.

Participants had the opportunity to visit the Amr ibn al-‘As mosque, the Saint George Church, one of the oldest churches in the Egyptian capital, and the Ben Ezra Synagogue.

The festival organisers’ aim is to promote mutual respect and understanding between Muslims, Christians and Jews, especially among the youth.

The musical programme featured different Egyptian bands and folkloric dances such as the Tahteeb, which stems from an ancient martial art performed with sticks.

Event organiser Aya Alaa said, “Here you can find a mixture of people from different religions, Muslims and Christians. We visited temples and learned new things about Judaism, for instance.”

Another highlight of the festival was the concert by Nuba Nour, a Cairo-based collective of Nubian singers and frame drummers. The band performed traditional music from antiquity along with modern folk songs.

“Nuba” is a term used for the people who inhabit the Nuba Mountains in the south of Egypt, on the border with Sudan, “Nour” means ‘the light’ in Arabic.

“I am happy with what I saw today,” stated a crowd member. “I got to know people, made some friends and saw dances for the first time.”

Said another festival participant, “When I see the mosque, church and the synagogue I feel that these religions reflect Egypt and Egyptian life and it makes me feel good.”

The carnival culminated with the meditative Mawlawiyah, or whirling dervishes, and Sufi singer Amer Eltony, pioneer of the Egyptian Sufi dance known as “Tanoura”.

The twirling folk dance is usually performed in Egyptian Sufi festivals. Dancers turn endlessly around the centre of the circle in which a singer stands, uniting them and those present both spiritually and emotionally.