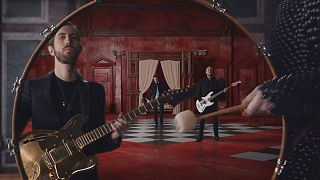 US pop-rock band Imagine Dragons are on a world tour to promote their album Smoke + Mirrors.

Band member Daniel Platzman said that the band were constantly trying to improve their live shows: “We’re really trying to up our game and change the experience of like what it is to go see a show. We’re trying to push as many boundaries as we can and give our fans the most exciting experience possible.”

Ben McKee added: “We’re really hands-on not just with the process of creating and producing the music, but also with creating a live show and the visuals and different interactive moments that allow us to connect with fans on different levels.”

The band, formed in 2008, enjoyed massive success with their first album Night Visions and now regularly plays to crowds of 80,000 people.

Dan Reynolds said their success had taken his mother by surprise: “To my mom, a year and a half before, she would come see me at some small club in California and there would be 10 people there and I’d be like, ‘Ma, trust me, this is serious for us! One day!’ And she’d be like, ‘Right. Right. But finish your education! Make sure you’ve got that education!’ It was like, ‘All right, I’m dropping out of school.’ But yeah, pretty fortunate. We’re happy to be where we are and we tried to build as organically as we could.”

Imagine Dragons will be touring Europe this autumn. Their album ‘Smoke + Mirrors’ is out now.