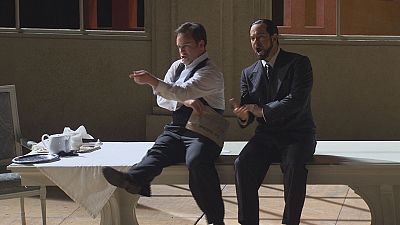 Igor Stravinsky’s ‘The Rake’s Progress’ is a tale of the rise and fall of a young man enticed by the devil with promises of money and happiness. It recently returned to the Metropolitan Opera in New York, under the baton of James Levine.

The score is full of rich reflections, somehow; you hear Bach, you hear Mozart certainly, Haydn, but it's never a copy. It's always through Stravinsky's wonderful filter

Russian-born Stravinsky was one of the most important composers of the 20th century. He worked on the neo-classical masterpiece while living in the US.

Innocence and experience
The devilish Nick Shadow convinces Tom Rakewell to leave his girlfriend for the attractions of the big city, but he falls into a downward spiral begins.

“Nick’s ultimate goal is to take the soul of Tom Rakewell.” said bass-baritone Gerald Finley, who plays the devious protagonist. “I think Nick Shadow has power over Tom because he is one of these characters, perhaps a universal character, where he offers potential and he offers the opportunity for enjoying life without too much effort.”

Tenor Paul Appleby, in the role of Tom, said his character is not entirely innocent: “He is not just a buffoon who falls for the devil’s tricks. The text is so brilliant and sparkling and then what Stravinsky does with it at the same time brings so much complexity to this guy who is bright, excited and understandably misguided.”

Learning at the Met
Canadian Finley has a close relationship with the Met, as has Appleby. The American singer knows the house inside out, having he studied there for three years in the company’s ‘young artist program’.

He worked his way up to performing on the legendary stage, a process which, he says, made him stronger as a performer and a person: “the pressure of being in a place like the Met is very educational and if you come out on the other end in one piece which not everybody does then I think you’re much stronger. You sink or swim essentially.”

For Finley, the Rake’s Progress was a challenge and an education:
“Oh, the score is full of rich reflections, somehow; you hear Bach, you hear Mozart certainly, Haydn, but it’s never a copy. It’s always through Stravinsky’s wonderful filter. So there is always a surprise or an enrichment of it. It drives a wonderfully interesting journey between the classics and the modern American musical,” he said.

“I think all of us can relate one way or another to this kind of journey of a character who hurts somebody he loves,” added Appleby. “That’s why it pulls on your heartstrings at the end when Tom Rakewell is trying to apologize for it because I think we can all tap into that feeling of regret.”

Euronews' Katharina Kaun was in New York to meet the stars of Stravinsky’s ‘The Rake’s Progress’, an opera about the...