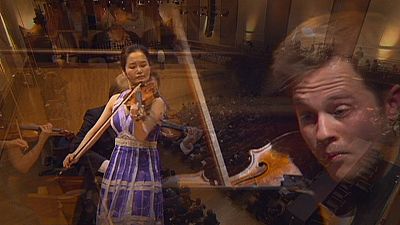 Violin virtuosos from around the world have descended on the Belgian capital for the Queen Elisabeth International Competition and twelve fortunate finalists were announced to compete for the top prize.

It is considered around the world to be one of the most prestigious and demanding music competitions and has been the launch pad for many a successful career, a fact not lost on the competitors.

“I’m so honored to be one of the finalists, and I mean, even already to be part of the competition is such an honour,” remarked finalist Ji Yoon Lee, from South Korea.

Each year the competition is dedicated to a different instrument, so this year is a big one for violinists who have been training hard to impress the jury.

“In this competition there is… quite nobody makes big mistake or something,” explained German finalist Tobias Feldmann. “It’s just about the musical expression and also the difference is how the judges maybe see each other.. “

Thomas Reif another German Finalist showed no fear. “For me it was a good connection with the audience and with the orchestra and the conductor, everything went fine. I actually didn’t look at the jury at all,” he said.

Rehearsals at the Queen Elisabeth Musical Chapel are an intense affair. A week before the live performances the finalists are kept in complete isolation. Mobile phones and tablets are locked away. Double doors provide sound-proofing for the young competitors, some who have been practising their art since the tender age of four.

For South Korean finalist Bomsori Kim the peace that comes with solitude is welcome. “I’ve heard about it, from my friends who were there last time. They said it’s so nice to be here, without any contacts. Actually, it’s really peaceful. So I’m excited to be like in jail,” she said laughing.

Musicians prepare their performances of a concerto of their choice as well as the unpublished work written especially for this year’s competition.

There is everything to play for with a top prize of 25,000 euros and a four-year loan of the “Huggins” Stradivarius violin, made in 1708 by the master craftsman Antonio Stradivari himself.

The winner will be announced on Saturday and a concert of the laureats will follow on June 3rd in Brussels.