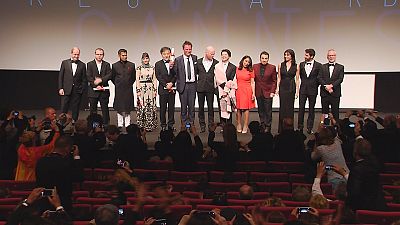 Icelandic comedy ‘Rams’ (‘Hrútar’) emerged the winner of the Un Certain Regard section at this year’s Cannes Film Festival.

The president of this year’s jury was Italian actress and filmmaker Isabella Rossellini, who handed out the prize to director Grímur Hákonarson:

“The travel that we took in so many countries, hearing so many voices, that was the best, but ‘Rams’ was finally the film we settled on,” said Rossellini.

It tells the story of two brothers, who have been living side by side without talking to each other for 40 years in a remote Icelandic valley. One day the two farmers are forced to unite to save what matters most to them: their beloved sheep.

The goal of the festival’s Un Certain Regard section is to showcase films that are daring and original by up-and-coming talent.

“It’s a great honor, I didn’t expect this, it’s my second feature and there are a lot of experienced directors in the group (Un Certain Regard), and very good films,” Grímur Hákonarson told euronews.

It tells the story of Costi, a family man who leads a quiet life in Bucarest. One day, his neighbour tells him about a treasure buried in his grandparents garden. If Costi agrees to help him find it, he will share the loot with him. Initially sceptical, Costi finally agrees to take on the challenge.

“It’s good and I’m happy for the movie, it works very well. For me the most important is the selection in the Festival… now it’s (got) a prize, so it’s a very good start for the movie,” said Corneliu Porumboiu.

The Jury Prize went to ‘The High Sun’ (‘Zvizdan’) by Croatia’s Dalibor Matanić.

A look at the dangers and strength of forbidden love, the film follows three different love stories set in three consecutive decades, in two neighboring Balkan villages burdened with a history of inter-ethnic hatred.

Japanese director Kiyoshi Kurosawa was named Best Director for the well-reviewed ‘Journey To The Shore’ (‘Kishibe No Tabi’), a touching ghost story about a piano teacher whose husband suddenly returns after reportedly dying at sea three years earlier.

Rounding out the awards were UCR’s Promising Future Prizes, given in a tie to Neeraj Ghaywan’s Indian drama ‘Masaan’, which was also a FIPRESCI winner, and Ida Panahandeh’s ‘Nahid’ from Iran.