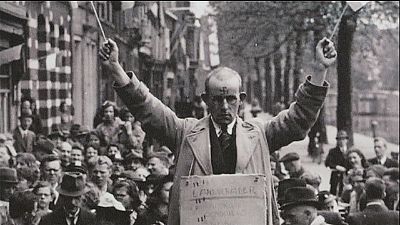 How did Europe deal with post-war life?

That’s the question a new exhibition in Berlin tries to answer.

Coinciding with the 70th anniversary of the end of the war, the show focuses on the aftermath of World War Two in 12 different countries.

Central questions are: “What was the state of these countries after the war? What kind of problems did the countries face? And how did the people confront what happened during the war?

“For us, it was important to show what was specific to each country. What were the challenges in these post-war years for countries like the Netherlands, the United Kingdom, the Soviet Union or Poland. How did the problems they faced differ but also what were the similarities? For example, in the way they dealt with collaborators and presumed collaborators,” says Maja Peers, co-curator of the exhibition.

The visitor is faced with the grim figures on mass killings conducted under the Nazis.

“Of course, it is always terrifying when you look at the scale of crimes that took place under German occupation, at the responsibility of the German state for what happened in other countries during World War Two,” says exhibition co-curator Babette Quinkert. “It is important to make this point clear once again, especially to younger visitors, that Germany started the war and that Germany was responsible for many crimes.”