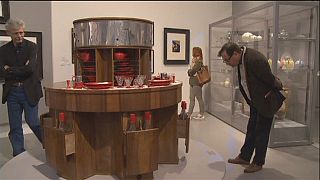 A new exhibition, Arts and Foods: Rituals Since 1851, has opened at the Triennale Centre in Milan, Italy.

The mix of food, art, and kitchen machinery is irresistible. It has been timed to coincide with the Milan Expo 2015, the food-themed world fair which runs from May to October.

The show is curated by Italo Rot, and Germano Celant, an art critic who coined the term Arte Povera in the late 1960s.

He described one of the exhibits: “In this room we travel through the scents of coffee, chocolate and bread. These are the materials used of the artwork, so the exhibit involves not just sight, but all five senses. And this helps visitors internalise complex issues raised by the show, like anorexia, bulimia, famine, and also the great pleasure of a beautiful cake of may colours.”

Another exhibit is a table designed by Angelo Fasce, and patented in 1936. The idea was that diners could serve each course of a meal by simply turning a handle, therefore dispensing with waiting staff, who might overhear anti-Mussolini conversation.

Germano Celant said: “The aim of the show is to bring the public closer to the complexities of history from 1851, the year of the first world exhibition in London, to today’s exhibition, in which the theme of food is explored through photography, cinema, literature, paintings, sculptures, and designs, to demonstrate the full scale of intellectual work that revolves around food.”