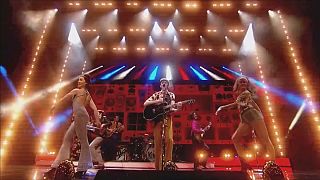 It was a grand evening for the British musical “Sunny Afternoon” at this year’s Olivier Awards.

Based on the story of the 1960’s rock band The Kinks, "Sunny Afternoon" blew away American competitors and won best musical at the ceremony on Sunday in London.

John Dagleish and George Maguire, who play The Kinks brothers Ray and Dave Davies, were awarded best actor and best supporting actor in the musical category.

“It’s still the same as it was when I first wrote it,” Davies said.

Brayben took on the role of Carole King for the musical, and her moving portrayal of the legendary American singer and songwriter has won her plenty of praise in the media, including from King herself.

The award for best actor went to Mark Strong, for his ==brooding performance in Arthur Miller’s A View from the Bridge=. The play also won best revival and best director award for Ivo Van Hove.

The role of tragic hero Eddie Carbone had lured Strong back to theatre after 12 years in film.

“All those other actors are so great – I just never for a minute thought that it would come to me… I’m just amazed,” he said upon receiving the prize.

American actor Kevin Spacey won a Special Award for his contribution to London’s Old Vic theatre, where he has been artistic director since 2004 and until later this year.

He closed the ceremony at the Royal Opera House with a rendition of Simon & Garfunkel’s “Bridge Over Troubled Water”.