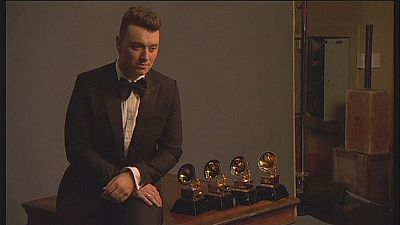 Pharrell Williams certainly had reason to be happy after winning three Grammy Awards, including Best Solo Performance and Best Music Video at the 57th Grammy Awards in Los Angeles.

Thank you so much for breaking my heart because you got me four Grammys.

But the big winner of the night was British singer-songwriter Sam Smith. Accepting the trophy, he said: “I want to thank the man this record is about, who I fell in love with last year. Thank you so much for breaking my heart because you got me four Grammys.”

The 22-year old won three of the top four awards, including Song and Record of the Year for ‘Stay With Me’, as well as Best New Artist.

“Thank you so much. I feel like Kate Winslet at the Oscars right now,” he said after the awards ceremony, his arms filled with trophies. “I’ve never done one of these. This is amazing. I don’t know how to react right now. This is absolutely incredible. It’s a dream come true. I’m the happiest I’ve ever been in my life.”

And fans can look forward to a new album, which Smith says is already in the making.

“I’ve already started writing. I work in terms of concepts. With ‘In the Lonely Hour’ I had the title ‘In the Lonely Hour’ before I wrote the music. I feel like I have a title and a concept to the record. I’m living through it now. I’m trying to kiss as many people as I can, so I can write some good music,” he said.

The surprise winner of the night was American rocker Beck, who went away with Album of the Year, beating the likes of Smith, Beyoncé, Pharrell and Ed Sheeran.

In addition to Album of the Year, Beck’s ‘Morning Phase’ took best rock album, beating releases by U2, Ryan Adams, Tom Petty and the Black Keys.