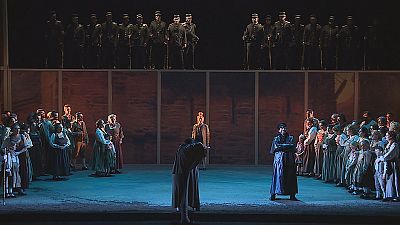 The apple sequence is the pivotal moment in the life of the legendary William Tell and of the eponymous opera by Gioachino Rossini.

The Italian composer’s signature piece has been produced recently by the Monte Carlo opera house, exactly a century after its last production there.

It belongs to a genre of music that has popular appeal yet is also appreciated by serious opera aficionados for its sophistication and complexity.

“Tell’s overture foretells and recounts the opera’s events, says conductor Gianluigi Gelmetti. “This is already revolutionary. The cellos at the beginning are of such beauty and were extremely new for the time. Rossini was against violence but in his musical ideas he was a great revolutionary, but a revolution to be carried out through thinking and normal behaviour, not through violence.”

The stage production, by director Jean-Louis Grinda, was conceived with the aim of enhancing the singers’ performance.

“I think that William Tell should be represented as an extra-ordinary person… William Tell is a giant,” says Grinda. “I have hired a giant, Nicola Alaimo is a giant, he’s a “huge” boy and he’s exactly what I was looking for, someone you know is not like everybody else; someone who could raise mountains!”

Baritone Alaimo also enthuses about his character: “William is a wonderful, extraordinary man, but also a man like many others. When I started to work on William I thought of my father. The love a parent has for his child cannot be expressed, it’s something wonderful, and I identified William with my father as he was like that: he would have done anything for his family. For me the aria in Act III is just sublime, and takes me so much closer to my dad.”

First performed in 1829 in Paris, William Tell is the “grand opéra” par excellence, a mix of drama, singing, music and ballet. It encompasses everything the French loved about opera at the time. It turned Rossini into one of the most famous personalities of his time.

“This is a piece of work where one feels that the world is changing for Rossini,” adds Gelmetti. “He tries to convey his feelings, his ideas through it, but it’s clear that he’s starting to feel ill-at-ease in that world. Its course is changing and, indeed, after this opera, he never wrote another one again.”