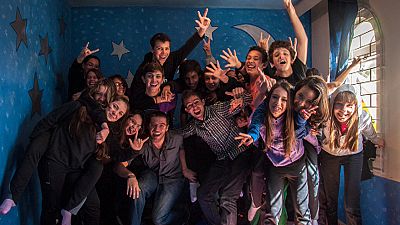 <p><a href="https://www.facebook.com/eurogeny" rel="external"><img src="https://static.euronews.com/articles/273814/600x78_blog-intro4.jpg"></a> <img src="https://static.euronews.com/articles/290474/600x135_Luiza intro.jpg"></p> <p>One in every four Brazilian students that start middle school will drop out, according to the 2012 Human Development Report by the United Nations Development Programme. This figure places Brazil as the third country with the highest number of school dropouts out of 100 countries with the highest Human Development Index. </p> <p>Daniel Dipp and Fernando Granato, now postgraduate students, decided they wanted to make a change when they were in university. They saw the flaws of the Brazilian education system as an opportunity to turn their ideas into real projects.</p> <p>As a child, Granato used to help his grandfather distribute food to the underprivileged. Dipp once saw a friend trying to rob someone: “We lived in different realities and we both saw that there had to be social change.” They discussed the idea and realised that every problem in the country came down to one thing: a flawed education system.</p> <p>In an interview for the Brazilian news website <span class="caps">UOL</span>, education specialist Helena Singer explains that young people are not invited to discuss school issues and goals, which might be one of the reasons for the lack of interest and subsequent abandonment of education. </p> <p>With that in mind, the two entrepreneurs from Curitiba, in the state of Paraná, decided to create a school with an innovative teaching methodology. One of their goals was to give students the tools to undertake more active roles in the education system. “We wanted to create an environment with a lot of exchange between the teacher and the students, face-to-face learning and frequent feedback from both sides,” Dipp explains.</p> <p><div style="text-align:center;"> <img src="https://static.euronews.com/articles/290474/600x398_Brazil edu blog 3.jpg"> <div>Quíron students find solutions in groups </div> </div></p> <p>Taking their name from a youth-nurturing greek mythology centaur, Escola Quíron – Educação para o protagonismo (Chiron School – Education for protagonism) started as a small project but saw exponential growth in 2013. In only 42 days, they were able to gather R$7.540 (around 2,400 euros) in donations through Catarse, an online crowdfunding platform.</p> <p>Following the stages of the ‘hero’s journey’ (or Monomyth), a theory popularised by the mythologist Joseph Campbell, Dipp and Granato help high school students to ask themselves who they really are, encouraging them to step out of the box to follow their dreams and change society. “We go from class to class and ask teenagers what is their favourite activity, and they usually say it’s sleeping. So we tell them that they either love it very much or their lives are kind of boring,” Dipp says. That’s when the two entrepreneurs make the “call to adventure” – the first step of the <i>hero’s journey</i> – inviting the teenagers to participate in the course. </p> <p>Laura Akemi was a very shy girl when Dipp and Grenato showed up at her high school class to present the project. “She had very rigid ideas about people and didn’t make friends easily” her mother Cymara Oshiro explains. “At the same time, she was open to learning new things. She developed the courage to speak in public and even decided to change schools. I’m really proud of her, and I’m trying to help to take the project to her new school”. </p> <p>The teachers at Quíron are university students who help high school students develop four areas: entrepreneurship, innovation, citizenship and self-knowledge. They teach, but at the same time they learn. “The teachers talk about following dreams, but what was the last dream they followed? The course helps them rethink their own actions. It’s the idea of teaching while being taught” Dipp explains.</p> <p>The classes are either in the morning or in the afternoon, whichever period the students are not in their “normal” classes (in Brazil students usually go to school in one of the two periods, either from around 7:10 in the morning to 12:10, or from around 13:30 to 18:30). This helps keep teenagers at school while giving them an opportunity to develop different areas of knowledge which schools don’t often to focus on.</p> <p>Eliza Roman, who is currently on the final stage of the course, says she has changed a lot, and doesn’t think twice about helping others whenever she can. “For my final project, I’m working on a kind of <span class="caps">GPS</span> for blind people. It guides them to their destination alerting them about possible obstacles on the way. My goal is to give them more independence,” Eliza says. </p> <p><div style="text-align:center;"> <img src="https://static.euronews.com/articles/290474/600x398_Brazil-edu-blog-1.jpg"> <div>Students work on a business model canvas</div> </div></p> <p>Earlier this year Quíron was awarded the UN’s <span class="caps">MDG</span> 2014-2015 seal, which recognizes projects that contribute to achieving the Millennium Development Goals. Dipp is now a postgraduate student at <span class="caps">USP</span> (University of São Paulo, Brazil) in the area of educational communication. He says they intend to expand the project to at least two more states in Brazil next year – São Paulo and Santa Catarina. </p> <p>Dipp and Granato hope to continue to make a difference in the Brazilian education system by showing each student that they are unique and that they should develop these differences to help build a better future. They also hope to keep inspiring teenagers like Eliza, who said: “Quiron showed me it’s us who build the society we live in.”</p>