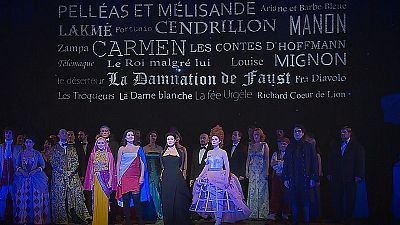 The Opéra Comique in Paris turns 300 this year and leading lights of opera and theatre have been paying tribute to this much-loved venue. One of Paris’s oldest dramatic and musical institutions, it is also central to the origins of a typically French genre mixing theatre and sung passages. With an alternatively turbulent and prestigious history, it boasts a unique repertoire of productions by some of the greatest composers and performers of all time.

An amusing and sophisticated show recently recapped three centuries of its memorable history. It featured artists who have given to and received so much from the Opéra Comique.

“For me the Opéra Comique is like my infant days as a singer, as the very beginning of my career took place here, where I got to know this wonderful staff. It was here that I learnt how to live in a theatre!” said French soprano Julie Fuchs.

“Here the management are very loyal to their artists. This is a place where the dressers are thoughtful enough not to ask in front of everyone if you’ve put on weight!” she joked.

Among the masterpieces first staged here was Hector Berlioz’ “Damnation de Faust”. Italian soprano Anna Caterina Antonacci speaks lovingly of this Romantic French composer: “I’m reading Berlioz’ Mémoires and when I found out that he despised us so much I felt sorry, as an Italian. Sometimes I’d like to go back in time and interpret for him his “Cleopatra”, an opera that was badly received when he presented it. He says it’s because it was badly sung. So my fantasy is to go up to him and say: ‘Let me sing it for you!’.”

“What’s amusing in this show is that parody is part of it,” said the theatre’s general director Jérôme Deschamps. In fact, in its history the Opéra Comique has often made fun of the ‘grand opéra’ and, also, it never took itself too seriously.”

Anna Caterina Antonacci also stresses the fun element of the production: “I’d say it’s the most difficult aria in the whole opera [“Carmen”], but it’s such an exciting role! Here I’m wearing this bizarre costume, the original one, in fact. I also had fun stepping on stage after Michel, who had the same costume. It was pretty amusing!”

Deschamps believes the venue is haunted, but in the best possible way: “You know, there are ghosts hunting this theatre, wonderful ghosts, everywhere. And when you hear these amazing voices you wonder whether they are not spirits echoing the huge talents who sang on this stage. This is something that really gives you shivers of delight!”