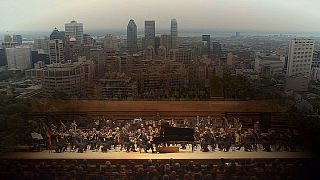 A state-of-the-art concert hall with unrivalled acoustics; these are the credentials that enable Montreal to host the great artists of today and tomorrow at its Maison Symphonique. Standing out among these young talents is British prodigy Benjamin Grosvenor, internationally recognized for his electrifying performances, such as Saint-Saëns’ Piano Concerto No. 2.

“The first movement is very dark, I would say passionate, mournful, great, fiery music there,” Grosvenor says of the piece.

“The second movement is light and playful, bubbly, has a second theme which for some reasons always reminds me of an old man walking down the road having drunk far too much champagne!”

As one of the top contemporary conductors and music director of the internationally acclaimed Montreal Symphonic Orchestra, Kent Nagano has been pleading the case for classical music to remain part of our lives.

He also been ruminating on the risks for civilisation if the arts in general were to disappear: “I’m thinking of the thorough education that so many of us received from studying composers such as Johann Sebastian Bach… not only to train one’s skills as a musician but to train a way to think, to look at the world, a way where one takes abstract thinking and can transform it into a long-term perspective towards the future. Without these skills the question is ‘what can we expect?’”

These worries are perhaps echoed by Jack Diamond, the architect of the Maison Symphonique. The guiding philosophy behind the building was one of openness and inclusiveness.

“I wanted it on the street, so we were careful on this building to see that this side of it goes down to the street. So this has a street presence – to me that’s crucial, that it’s part of its urbanity,” he says.

“Why go to a performance? It’s the gregarious activity of listening to it in a crowd. The public dimension… that really transforms architecture from building into something of greater purpose.”

“Seeing people gather, making it transparent… you know, when you don’t know about something it’s always a little scary; once it’s apparent that people are there having a good time, you tend to think: ‘well, I could be there too!’ So I think that transparency certainly helps the success of a cultural institution.”

“We asked that the community and the government consider a hall, not only for the orchestra to have the chance to develop but for actually for Montreal to have a home. It feels partially a meeting point where the community comes together but it also is a place where a community shares, through the medium of music, sensitivities, relationships, experiences, aesthetics.

It is certainly a venue where Benjamin Grosvenor felt comfortable: “I love performing from a very young age, it is really the act of communication with an audience… the act of sharing the great music that I love, that’s something that really appeals to me!”

Sharing great music and ensuring it endures is also a major concern for Kent Nagano, as he reveals in his coming book “Expect the Unexpected.” In it Maestro Nagano makes a passionate plea for classical music which, he warns, is in danger of disappearing; its loss would not only impoverish society, but would deprive it of inspiration, emotional depth and a sense of community, he states.