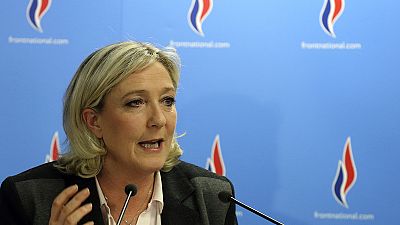 <p><a href="https://www.facebook.com/eurogeny" rel="external"><img src="https://static.euronews.com/articles/273814/600x78_blog-intro4.jpg"></a> <img src="https://static.euronews.com/articles/276796/600x135_Selina intro2.jpg"></p> <p>The Channel may separate France and the UK, yet politically our similarities at the moment are striking. Anti-EU far-right parties Ukip and the Front National riding on fears of immigration have sent tremors across the European political landscape. </p> <p>Having lived in France last year and made lots of friends from all over Europe, my social network feeds erupted as European election results came through. </p> <p>As in the UK, young people are ashamed, some even afraid. Educated, opinionated and open-minded young French people can see right through the backward and inward-looking spiel of Marine Le Pen and the Front National. Many of them have also spent time living abroad and appreciate free movement within the Europe Union. </p> <p>Yet it is hard to not admit that Le Pen is incredibly convincing. Like Nigel Farage, her bold personality and clear stance amongst comparably wishy-washy and soft politicians has proved that she is a force to be reckoned with. Like Farage, she speaks in simple yet emphatic language that reaches the ears – and apparently the hearts – of many in France. </p> <p>With his popularity ratings at their lowest and after the scandal of his affair with actress Julie Gayet earlier this year, François Hollande appears to be a soft touch in the eyes of many French people. Satires of ‘Flamby Hollande’ (a French caramel custard dessert) are well-known amongst the French population. </p> <p>After the “political earthquake” caused by the Front National, Hollande is wobbling nervously like the trademark French dessert, calling an emergency cabinet meeting immediately after the European election results. </p> <p>Sandra Geiss, who works in a patisserie in Paris, said: “Hollande does not seem to be succeeding in assuring the French […] A lot of people think that he is not up to the task.”</p> <p>Many young French people are outraged and shocked at the FN’s victory, asserting that the result does not reflect the outlook of the French nation as a whole. Like in the UK, voter turnout was poor at 43% with a high level of abstention amongst young voters.</p> <p>“This is a minority of French people and not France as a whole. The FN’s victory is down to abstention,” said Célie Pillard, a student living in Rennes. Clearly no one I know is an advocate of the FN. </p> <p>It was assumed that support from the FN comes from an older generation, yet what is worrying is the amount of young people who share the FN’s views. A French study has found that 30% of those aged under 35 voted for the FN. The Front national de jeunesse (<span class="caps">FNJ</span>), the FN youth movement, has over 50,000 likes on its Facebook page and nearly 7,000 followers on Twitter. </p> <p>“I think that a lot of people […] are attracted by Le Pen,” said Caroline Chauvet, from Vichy and studying in Paris.</p> <p>“The French are looking for change. The two main political parties who have been in power for the last ten years have disappointed voters. People are therefore turning to a party who is promising them a radical change,” added Sandra. </p> <p>With a significant number of residents from France’s Overseas Departments (<span class="caps">DOM</span>s) as well as other immigrants, Paris is the French hub of multiculturalism and diversity. However the FN’s growing strength is pushing many young people to consider fleeing from an increasingly inward-looking mentality in search of more tolerant and accepting cultures elsewhere. </p> <p>“Quite frankly I am a bit scared and I am increasingly tempted to leave my country and I can see that I am not the only one,” said Sandra.</p> <p>While an immense amount of coverage has been awarded to the Le Pen’s shock victory, not enough attention has been given to those fighting against the hatred, hostility and bigotry generated by the FN. France is not a racist or xenophobic nation. As in the UK, it is a minority propagating regressive thoughts and grossly inflated facts to win over ignorant and dissatisfied supporters. It is no coincidence that support for the FN and <span class="caps">UKIP</span> is highest in rural and remote areas which are the least affected by immigration. </p> <p>On 29 May 2014, young French people mobilised across France to march against the FN. The march was organised via Facebook by Lucas Rochette-Brelon, a six form student from Marseille. The French youth are not sitting back and passively watching the rise of the FN. They are showing the FN, political parties, journalists and the world, that they denounce racism, xenophobia and hatred. They are fighting for the France of ‘liberty, equality and fraternity’. I just hope that this battle is won.</p> <p><i>Do you agree with Selina? To discuss this topic and more just send us a message on any of the Generation Y social media pages. Find us on <a href="http://facebook.com/eurogeny" rel="external">Facebook,</a> <a href="http://twitter.com/eurogen_y" rel="external">Twitter,</a> <a href="http://google.com/+eurogeny" rel="external">Google+.</a></i></p>