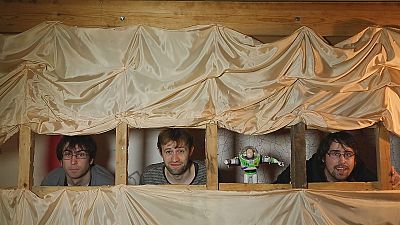 In this episode of ‘Generation Y’ we open a new chapter about citizenship, starting with nothing less than a revolution. A group of young Belgians has invented a game to reinforce a sense of community and solidarity. Welcome to the ‘Soft Revolution’.”

“The old municipal services warehouse at Porte de Ninove is a key meeting place for many Brussels residents, but it’s also been left to abandon, which is absurd,” says Yannick Schandene.

Yannick is determined to change this situation and has found a way to motivate the local community into pressuring the Brussels authorities to look at this place again.

“The idea is to create a temporary, ‘pop-up’ park which allows the people to repossess this space for themselves. We’ve asked people to help, anyone can chip in, from 10 euros to 750, to buy facilities for the pop-up park. 10 euros buys a square metre of grass, while you can also contribute flower beds, or vegetable patches,” he says.

Lennert Mottar’s contribution to his city is much more technological: he helps young people to visually develop their creativity.

“It can be a photography workshop, or it can be a short film project. People learn how to handle media by doing it directly. I try to help these young people, but they also give me energy and inspire me to do what I do,” he says.

Together Lennert, Yannick and also Bavo Blanckaert are the “Soft Revolution”, a volunteer’s platform that has a very simple plan: to change the world by mobilizing people around them to open up to solidarity and cooperation in everyday life.

“It’s possible to make your own ‘soft revolution’ and to expand the idea, the notion of what it is… We like it when people let the child in themselves talk. You can dream and you can do more things,” says Blanckaert.

Their latest initiative got the support of the European Commission. It is a board game called “Choose Your Happiness”, where players have to solve dilemmas that pitch personal interests against community harmony.

“My neighbours are complaining; will I end my party with my friends? When I choose that, my individual happiness goes down. When I choose to continue the party, it’s the collective happiness that goes down,” says Lennert Mottar.

“In some cases, games are a serious thing, in the sense that through a game young people learn, they discover things, they develop tactics, strategies, without even noticing it and having fun,” says the European Commission’s Erasmus+ co-ordinator Giorgio Guazzugli Marini.

“It’s a small move to create consciousness,” insists Mottar. “There’s a lot of creativity here among young people. There’s a need for a space, away from school, for expression.”

“It’s a sexy way to attract people. These projects also meet a priority of the Youth in Action programme and in the future also the Erasmus Plus programme, which is to support young people’s entrepreneurship.”

At the end of this year, Soft Revolution will finalize their board game with the support of the Youth in Action Programme of the European Commission. This product is aimed at youth organizations, youth associations and the first stage of secondary education. Four young people from Soft Revolution will be using two external volunteers to take the already existing prototypes to a higher level and a final developed board game.

Through a variety of initiatives, the young collective Soft Revolution seeks to promote community building, with a healthy dose of naivety, play ethics and civil participation. To gain attention for the role and the social relationship that every citizen has with their environment in a funny way, this collective developed a board game.

In Choose your Happiness, the anti-competitive game, the players’ decisions reflect the choice between the pursuit of individual happiness and the harmony of the community. The purpose of this exciting board game is to become the happiest local resident without leaving the community in disharmony behind.

The game is based on a community where each resident, (player), is a social actor and where the local socio-cultural associations provide several opportunities. The game aims to stimulate thinking and framing the meaning of civil participation, winning and losing, freedom, competition and solidarity, through an accessible and subtle methodology.

After three presentations in Brussels and Flemish Brabant, Soft Revolution will go on a tour to visit other organisations and associations to have play sessions.

Thereafter, 30 boxed games will be put into circulation via a lending system. The game packages will be provided with a comprehensive manual to help youth workers, teachers and associations use the board game as a methodology within their activities.

What is Soft Revolution?

“A girl is sitting in a fast food restaurant and craves a soft ice cream. Only she cannot decide which flavour she prefers. Because she is unable to make a decision, she asks the man at the counter what he would suggest. Astonished by her question, the man mixes two flavors into his favorite, and furthermore, he gives the girl an extra portion.”

With a playful booklet, Yannick Schandene, Bavo Blanckaert and Lennert Mottar try to link the philosophy of the ‘soft revolution’ with some contemporary tendencies that can already be seen in various movements and organisations.

The central idea of the soft revolution is a plea to add more so-called ‘random buttons’ in the diverse aspects of life. The random button is a procedure in which – if the situation allows it – we let go of all control and let fate decide, in order to arm the individual, organization or the movement against fragility in those moments of doubt, motionlessness, or creative deadlock.

The implementation of random buttons in the diverging aspects of life undermines control and performance-focused tendencies, in which repression, obsessive efficiency and competition continue to displace our humanity. The point of the ‘lifehack’ is not to cause confusion or to elude responsibility, but to return to the essence of our inter-human understandings. To meet and to build constructive and lasting relationships, we must not be afraid to be candid and open-minded but simultaneously involved and worried. If we really do want to pay attention to one another, initiate a meaningful dialogue or start mutual relations or cooperations, we need time and space and we therefore need a form of inertia. To somewhat compensate for this inertia, we can manage this random button as a methodology.

Although Soft Revolution encourages everyone to read the booklet, the collective primarily focuses on our cultural and social lives. Social life is becoming more fragile because a lot of functions and ways of thinking have become a routine, and we are suffering from some sort of non-alignment, while volunteers or members move more dynamically through the same scenery.

If self-development and the expansion of a sustainable social network form the base of cultural social life, then expressing personal passion, playing morality, curiosity and social positioning remains the logical essence.