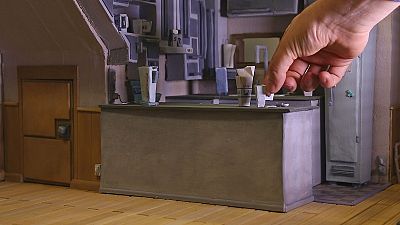 How does a character from an animated film come to life? And how are the visual effects created? Generation Y went to one of Europe’s leading animation schools to find out.

It is perhaps easier to ask what The Animation Workshop school doesn’t offer the budding artist.

This creative cocoon in Viborg, in northern Denmark brings together students from various backgrounds in a highly informal atmosphere. They can study classical drawing, animated documentaries, character animation.

“Ever since I was really young, I used to draw silly little cartoons. I was always drawing. I didn’t think that I could make a living out of it. It’s a fascinating world and I’m in awe daily just coming in and see people work,” David said.

“We’re making a film at the moment… It’s about a struggling medical student who needs to find someone to move in with him to help pay the rent and the bills. In desperation, he writes an online advert ‘Roommate Wanted – Dead or Alive’. And then a zombie turns up.”

Another student, Stefan Bjornfort, is taking the the visual effects course, which is supported by the EU’s MEDIA programme (soon to be integrated as part of the Creative Europe programme). He feels lucky to have access to state-of-the-art technology.

“I know I can take it (an image) from here to here, using this range of programs. I can use Maya, Houdini, V-Ray… the list just continues. You become like a one man army. You can take a project from the start, from the idea, to the finished project.”

At the Animation School it’s all about learning on the job. And there are real work opportunities just next door, as student Svend Rothman explains:

“We’re in the main building, where there are lots of companies, new companies, by some former students and some teachers, who have started their own companies here doing commercials, feature films and short films, TV shows and computer games. We’re making a feature film about some Irish folk tales.”

At the Workshop they believe that ultimately, animation is the art of storytelling,

Director of The Animation Workshop Morten Thorning believes Europe has a lot to offer in this regard: “Lots of people will go and see a bad – sorry for calling it bad – but a really empty American movie because it’s nicely done. So our philosophy is that we need to get people up on the same skill level, because it’s my belief that we actually tell better stories in Europe, “ he says.

“So I think what will happen in the next 10 years is that animation will move from being something that is used only in entertainment … to being a key skill in communication,” Thorning adds. “It’s something that we will use everywhere to explain things that are hard to understand.”

David Crisp says the Workshop opens doors to the industry:

“We have a lot of amazing teachers from Disney, Pixar, Dreamworks.. It’s part of the course that you go out and do an internship at these companies, so that you start in the industry, as part of the school.”

Morten Thorning says it’s vital to stay in touch with developments in the industry: “We talk to the companies all the time, discussing what is happening in your company, what are you expecting in the coming years’, and we put it into the tailor-make of the courses, so they fit the needs of the companies.”

Up to now, Generation Y has been telling stories around the issue of jobs. But a new year brings new questions. Join us to explore what Europe’s young people are doing in the cultural world.