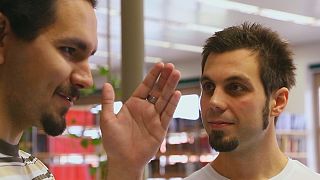 “I am leaving Croatia because I want to work on a project that can’t be researched here. My project concerns anti-matter and its properties and because nobody is doing the project in Croatia I have to find my place elsewhere”.

Matija Zesko is leaving the country of his birth to go to Germany in October.

He is not the only one going.

The brightest young people are leaving Croatia, some estimates say 10,000 of them, every year.

The government is aware of the problem and is taking measures to transform the brain drain into brain circulation; that is stimulating the mobility of young and brilliant researchers but also encouraging their return to Croatia.

Amongst those measures, is ‘Newfelpro’ a seven million euro program to be distributed over four years.

It is 60 percent funded by the Croatian government and 40 percent by the European Union, through the Marie Curie Fund and starts in July.

The news was greeted with satisfaction at the Department of Chemistry in the Science Faculty.

A PhD chemistry student at the University of Zagreb, Nikola Bregović, said: “This government initiative has a few really good points. It is very good for young researchers, young students, scientists, to be able to go abroad and to bring new knowledge back to Croatia and to bring PhD students and post doctoral students to Croatia from other countries.”

Newfelpro is a step in the right direction but by no means enough.

Marijan Herak, university Professor in Geophysics, has been teaching at Department of Geophysics at the University of Zagreb for the last 30 years.

“If we want to talk about how to stop the brain drain, or maybe it is better to say how to enhance brain circulation, because that is what we need, we need people to circulate among countries, among institutions, I am talking about scientists, of course, …. then you eventually have to attract them (researchers, students) back and the only way to do it is to invest more in research and development,” Herak said.

Matija and Nikola know their passion for research means dedication, perseverance and sacrifice, but it also brings rewards.

They both have a dream. Matija told euronews what she wants: “To make science something that benefits humanity.”

For Nikola it is more personal: “The main goal in my career, in my work, in every day work, is to know something no-one else in the world knows. So discovery is maybe the main force that drives me.”

But while waiting for Croatian science’s “third” way, Matija and Nikola’s lives are going to take different directions.