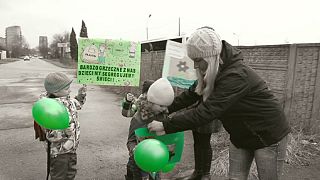 The Bytomka river running through the Polish town of Zabrze has become a classroom for children from a kindergarten in the town. Two of their teachers, Karolina and Joanna are using it to show the children the consequences of decades of industrial pollution in the river. Zabrze is one of the most polluted towns in Europe.

Many people would like the problems of pollution to be solved but often expect the next generation to solve them. Are the young ready to take on these expectations, this challenge?

For Karolina the best way to protect the environment is to make it a practical part of daily life. At the kindergarten, in Zabrze, south of Poland, most activities have a green dimension.

“I belong to a group of people who can influence children on this question. It is up to us to spread this knowledge to them because sometime in the future it could be too late for that. Otherwise we will be drowned in waste and that will be the end of it,” explained Karolina Wojtal.

Recycling is a top priority of the kindergarten. Every year, each European generates over 500 kilos of municipal waste, more than one third of which goes directly to landfill.

There has been some progress in Poland. Between 2001 and 2010 the country has had the biggest reduction in waste sent to landfill among the 27 members-states.

“I am really aware of the results of working with the children. I watch them in every day situations. For example, when they were washing their hands they used a lot of water, not paying attention to their anti-environmental behaviour. But now, I work with really small children and after a couple of months being here, when they can’t turn off the water they warn us because they think it’s bad for the environment,” said another teacher Joanna Lenartowicz

These ecological activities are developed in partnership with schools from six countries, France, Italy, Portugal, the UK, Romania and Turkey. It is supported by the Comenius programme, an EU scheme that promotes international cooperation between schools. The school partners met through the European online platform e-twinning and developed their partnership. As well as the virtual relationship, teachers visit each others schools. The Director of the Kindergarten Ludomira Paradysz recalled a school visit of theirs.

“So far we have visited a school in Turkey and we compared our teaching methods. We visited a typically pro-ecological school there. They have their own gardens, where they seed, plant and grow their products all year long. The students learn how to handle plants and to take care of them and how to live in the environment, how to respect the environment and not to shed litter.”

The town’s water treatment plant was the biggest investment in the history of Zabrze. It receives the wastewater that used to go to the Bytomka river. The plant manager Grazyna Peciak of the site organises educational visits for students. She has seen changes in the attitude of the younger generation.

“I show young people the wastewater treatment plant, specially the heart of the station, so they see where all the sewer is directed from their houses. Young people are very interested in all the processes here, what happens, where does wastewater flow in and where the outflow is. It is very encouraging,” she said.

Imagine a world where children would have to wear masks. That is the nightmare that Karolina and Joanna hope to avoid.

“There is an active involvement of all the kindergarten staff and it influences our children in a tremendously effective way.You can see in their behaviour. It is a very mature pro-ecological attitude. I think in the future they will become a sort of small group of ecologists, yes I think for sure they will do that,” concluded Karolina.