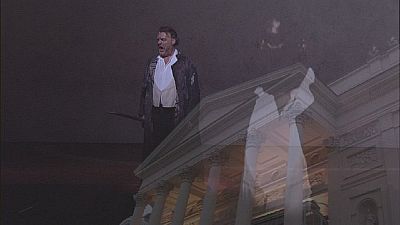 2013 will mark the bicentenary of Wagner’s birth.

To celebrate the anniversary, London’s Royal Opera House has put on the whole of Wagner’s Ring, with Maestro Antonio Pappano on the podium and bass-baritone Bryn Terfel as an outstanding Wotan.

“Wagner is such a different kettle of fish to any other composer,” says Bryn Terfel.

“It takes a toll on you vocally, mentally, physically, but at the end there’s something really incredibly special about a sense of achievement.”

“The basic operatic materials – hate, love, politics, violence, family, duty – those are all there, but there’s more, it’s even more personal with Wagner. The ego – how is the ego attacked? And what [happens] to the ego when it’s under attack? Does it break down? Does it fall? Does it rise? There’s all that in the Ring, and it’s frightening to watch,” says Pappano.

“I have a deep affinity with the third act of Walküre,” adds Terfel.

“It comes at a very difficult time within the fifth hour of singing, so you’re in the lap of the gods […] vocally, mentally, physically. It’s a very emotional feeling to give up your daughter and to never see her again. I have three boys at home – don’t have a girl – so I can see how a father is tortured and troubled by [the] end of the opera.”

The German language adds to this sense of hardship according to Bryn Terfel:

“German is a language, for me personally, that plays tricks with the mind: der, die, das, doch, denn, so it’s constant homework: religiously, every night, you have to look at your scores.”

Wagner is also a real challenge for the world-renowned conductor:

“[Musically] You’re constantly in transition, and you cannot go from fourth gear into first. Wagner’s music tends to always be in a certain motion, either going more and more quickly or more and more slowly, and building tension or releasing tension – which is actually great theatre. [It] works on you psychologically,” says Pappano.

“It’s a revolution in terms of what is demanded of the audience. Wagner definitely was out to change the audience, somehow, to purify them, inform them, shake them up, shock them, get under their skin. Wagner is a towering genius, but challenging, somebody who does change your life, for sure,” concludes Pappano.

In this story one can hear fragments of Richard Wagner’s Das Rheingold and Die Walküre.