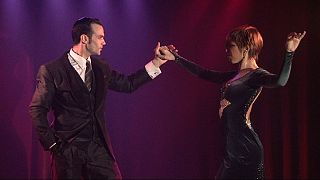 “It is a dance that is more like a love embrace. Tango is synonymous with sensuality, seduction, and eroticism.

“It takes two to tango”, says dancer and teacher Jorge Firpo. “Two people dancing in an embrace. There’s a code whereby the man leads and invites the woman to make certain movements. But the man also has to take into consideration the woman’s pace. There has to be a harmonic communion, communication of the bodies.”

Just like Jorge Firpo, Aurora Lubiz has been a dancer and a choreographer for almost 30 years.

Improvisation, creativity, imagination would you think be three keys to being a good tanguero. In actual fact, for Aurora the secret is elsewhere.

“This is the secret,” she confides. “When I first went to a milonga a wonderful dancer told me: ‘Aurora, to dance tango you have to walk the way you walk in life, this is the only thing you need to do, and you have to think of the human being who’s embracing you’.

A sad thought that can also be danced” – this is one of the many definitions of tango. For Aurora it’s more than just that. “I think it’s many different thoughts that can be danced: sad, or happy thoughts, thoughts of betrayal, of suffering, of encounters, of goodbye’s… life!”

“When I manage to open my heart, to open up my body, and I encounter another human being, there, I think, lies the magic of tango. The encounter of two human beings happens as you’re looking deep into each other’s eyes – and then you’re making love!”

Tango began to evolve at the end of the 19th century, based on the dances of former African slaves.

Local peasants drawn to the city, petty criminals living in the drab outskirts, and Italian and Spanish immigrants crammed into the port’s tenement blocks were those who took the first steps of a dance that would soon rhyme with Argentina, and passion.

Today hundreds of thousands of tango buffs cultivate that passion in the milongas, determined to master its secrets.

“We Argentinians are very attached to our neighbourhood, to the local café or bar, where we meet to discuss football or politics… we try to sort out the world’s problems. There are places and topics such as family, parents, mothers, childhood friends that the poet, the lyrics writer, tells us about in tango songs. Tango defines us, it defines our culture, and I don’t know if I could live without tango,” concludes Jorge Firpo, and he means it.

Special thanks to Buenos Aires’ El Querandi (“Nuestro Tango”) and La Faena Hotel Universe (“Rojo Tango”) that kindly allowed us to film some extracts from their shows.