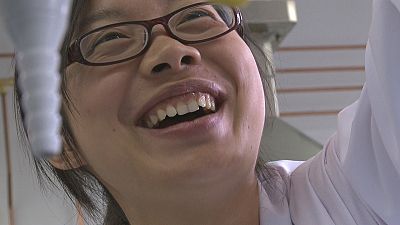 The mysticism of the Far East has long enchanted Westerners – and one young Belgian is no exception.

Though he admits China is not without its faults, Olivier Mathieu plans to make his way in the most populous country in the world.

But for the time being he will have to make do with Belgium. After spending a year in Beijing, Olivier is keen to keep his eastern promise and return to Asia to learn Mandarin.

“I feel at home in China. For me Chinese people are nice, natural, and friendly. We feel at ease whatever we do,” he explains.

But for Jia’ai Hou and Simon Xiangyu Kong, who have enrolled on Master’s programmes at KU Leuvan University in Belgium, Europe is the only continent for them.

“People from different countries have different thinking strategies and we can learn a lot from the way they are thinking,” said Jia’ai and Simon added: “I want to go back to China and find a good job in Beijing or in Hong Kong.”

The University has always maintained a tradition of keeping close ties to China over the last 35 years and 2012 is no exception with 500 Chinese students and researchers expected to descend on KU Leuvan’s campus.

Jia’ai does research on pesticide bio-degradation. She is working on a sample of contaminated water from the Negev Desert in Israel.

She thinks European scientists tend to communicate more with each other and in general people look more relaxed.

“China is growing so fast. We have to keep up the pace, so every day I just rush. I have to do things quickly. Here we enjoy life,more,” she opines.

Speaking of rush, Simon is currently doing three masters degrees, one in Management, at Peking University, another in Finance, in the University of Hong Kong and this year one in Business Economics, in Leuven.

“I don’t think economics is a subject I can learn in a closed environment. I always wanted to be more exposed to the international environment and I enjoy the life here very much,” he explained.

The three students are studying abroad with a scholarship from Erasmus Mundus, a programme designed by the European Commission to strengthen EU-China cooperation in education and culture.

While Chinese students compete with each other to get a scholarship to come to Europe, Europeans seem less interested in Chinese universities.

At University Libre de Bruxelles, there were not that many applications.

“For the engineers I know there is the US and Europe, they don’t think about the rest. It is a pity because industry is side-by-side with the university. Together they make things happen. And that is the way it works in China. The industry comes to see you in the university,” said Olivier Mathieu.

Olivier spent one year at Tsinghua University, which is seen as the best place for studying engineering in China. Students have to work hard to get in. For now Europeans are considered as guests.

Olivier is completing his master degree at ULB and plans to go back to China in September. He is looking forward to it: “China has nothing to do with life here. People don’t have any idea of what is going on there. People talk about China’s economic growth and say that Chinese copy the others. So in the end it seems that there is no good reason to go there. While in fact it is a laboratory. They are learning about themselves. If there is one thing to see at our present time it is the wakening of China.”

But learning is not the only purpose of the programme. Erasmus Mundus is also intended to promote cultural understanding between people as Simon explained: “Before I came here I didn’t think I was the kind of guy who enjoyed a lot of partying. I’m the kind of guy who can stay at home for a long time. But after I came here I met a lot of friends who like parties and I think it is a fun and interesting way of getting to know new friends.”

So far the programme has supported nearly 4,000 Chinese citizens in mobility programmes around Europe.

Erasmus reaches out to China

Dialogue is the only way forward