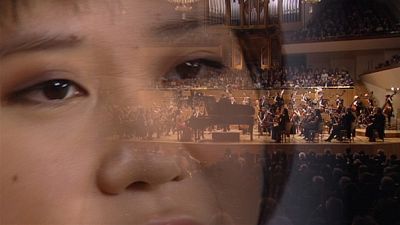 They call her Flying Fingers, and she certainly lives up to her name. Yuja Wang is a piano virtuoso with exceptional abilities. At only 24, she is globally recognised.

Wang, who is currently in Madrid playing with the National Orchestra of Spain, enthused: “My favourite moment is probably when I go on stage, sit down, and my melody comes in. It’s so sincere and so Russian because it’s two pages of one breath of melody.”

Wang was talking about Rachmaninov’s third piano concerto. It is hugely complex, and considered one of the most difficult piano pieces ever written. Famed for having more notes per second than any other piece for the piano, the composer dubbed it the Concerto of Elephants.

“It’s like a huge Russian novel with different characters lots of complicated plots,” says Wang. “Musically I think it’s such an enormous piece. It’s like climbing the Great Wall of China, and to actually have an overview of the full concept. It is so hard.”

Born in China but now living in America, Yuja Wang is part of a world elite of pianists. After starting to play piano at the age of six, her talent was soon discovered and she quickly became a child celebrity. Her lightning speed finger movement earned her the nickname ‘Flying Fingers.’

“I remember when I was young playing whatever piece I was playing, my teacher used to say can you stop rushing. That was actually my weakness because, I would always go faster and faster. It’s just my own nervousness and my fingers can just do it.”

Wang also believes she can thank her mother as she was a dancer and regularly stretched her daughter’s hands. She explained: “My fingers are very skinny and they are double-jointed. They’re kind of flexible everywhere. My mum stretched me when I was young, so I have big spans even though I don’t actually have a big hand.”

Wang’s technical skills have been described as astounding and superhuman, but she now devotes her time to other things as well. “I think when I was in China I probably concentrated more and was more disciplined. When I came to America, I became curious about lots of stuff like art, philosophy and literature, so I divided my time up with all those different areas,” she said.

With over 100 concerts a year, Yuja Wang is on the road most of the time. At every performance, she sets herself a new challenge. “Each concert I try to do something different. I think of it from a different point of view because there are so many concerts. I try not to copy myself, but to reinvent myself.”