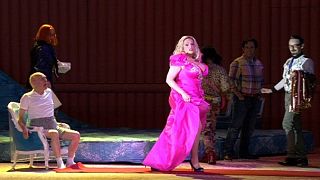 Her life was a soap opera, played out in courtrooms and on the pages of gossip magazines. The world was fascinated by Anna Nicole Smith: her plastic surgery, the Playboy centrefolds, the strip clubs, her bankruptcy and finally her premature death.

Now, at the Royal Opera House in London, her story has become a real opera.

Her first husband was 16 years old. Her second was a billionaire octogenarian.

Richard Thomas who wrote the libretto told euronews: “She was a fabulous eccentric. There’s something absurdly beautiful in her rise to fame, and just deeply moving and tragic about the horrible end of her life. Her problem came when she fought for half of the old man’s fortune, so she was in and out of court for 10 years. In a way it’s another cautionary tale: there’s no such thing as easy money! Because she spent ten years chasing this easy money, and didn’t get a dime!”

She was a fixture in the media, famous for being famous, a celebrity created and maintained by the hunger of the 20th century media. And that raised some questions for the writers.

“The libretto has quite a lot of swearing,” said Thomas, “It’s very contemporary, there’s a lot of references to musicals and to pop songs.

“It’s very conversational language mingled with rhyming couplets, and suddenly you have bursts of poetry. There’s a great dynamic, there’s a pace there, there’s tension, and the clash of the words and music. It’s a good little trick!”

The score is made up of a myriad different styles touching pop and soul, R&B and jazz.

The Royal Opera House’s Music Director Antonion Pappano said: “The idiom is very tricky for opera singers because here they have to make sounds that favour the words, the words have to sound American, at certain moments they almost have to sound pop-like, with that kind of freedom and flexibility, but Mark Anthony Turnage, the composer, at certain points writes very operatic phrases for Anna Nicole, and there she must sing like she’s singing Tosca.”

Anna Nicole Smith’s life was stranger than fiction. Highly paid modelling went out of the window after botched plastic surgery. She was a shameless self-publicist and a laughing-stock. Her son died of an overdose, and she too went the same way, succumbing to prescription drugs. She was 39 and penniless.

Pappano said: “Anna Nicole’s mother makes a statement: ‘Take care of your children because the world is a dangerous place’, I’m paraphrasing, but it’s true, the risks out there are there to be taken, but it’s a frightening business, the world of risk and the world of adventure with a big A that we call life – it’s scary.”