It is day 51 of the war in Ukraine, as Russian forces are expected to begin a new big offensive in the east of the country after their retreat from the Kyiv region and other parts of the country revealed growing evidence of human rights atrocities.

Kyiv forces continue to prepare for the renewed assault, while Western nations keep tightening sanctions against Moscow and NATO and condemnations of Vladimir Putin's actions continue to grow.

Follow Friday's events as they unfold in our blog below, or watch TV coverage in the video player above.

Serbians take to the streets in support of Russia

Protestors have held a demonstration in Serbia in support of Vladimir Putin, after Serbia voted against Russia at the United Nations.

Hundreds of protestors gathered in the Serbian capital Belgrade, carrying pictures of the Russian President and T-shirts emblazoned with the letter Z, the symbol of Russia's invasion of Ukraine.

The Friday rally was organised to protest against Serbia's vote to expel Russia from the UN Human Rights Council.

Serbia remains the only country in Europe that has not imposed sanctions on Russia, but right-wing groups are angry that Belgrade is undermining Moscow internationally.

Local media say that masked protesters lit flares and smoke bombs outside the offices of the Serbian President Aleksandar Vucic during the protest and placed a Russian flag on the presidency building.

Similar protests have been held across Serbia since the outbreak of the war in Ukraine. Many Serbians are loyal to Russia, believing Moscow was provoked by the West to launch the invasion.

Anti-western sentiments in Serbia stem from a 1999 NATO bombing campaign that forced Belgrade to give up control of the Kosovo province.

Germany to give Ukraine more than 1bn euros in military aid

The German government announced on Friday it wanted to release more than a billion euros in military assistance for Ukraine.

Berlin has not specified what the money will be used for, with Kyiv complaining it has not received heavy weaponry from the country.

The billion euro cheque will be used by the Ukrainian government to finance the purchase of military equipment, and comes onto top of a seperate billion euro aid deal between the two countries.

Berlin is trying to respond to growing criticism from Ukrainian authorities, alongside other EU partners, such as Poland and the Baltic states, that it is not providing enough support to Kyiv, with some accusing it of showing compliancy towards Russia.

The German government is reluctant to authorise the delivery of heavy weaponry, such as tanks or helicopters, for fear of entering into a dangerous military spiral with Russia.

The move comes after the German President, Franck Walter-Steinmeier, suffered a diplomatic snub Wednesday, when a proposed visit to Kyiv was refused by Ukraine.

Ukrainian authorities said the head of state, although in a largely ceremonial role, had pursued a pro-Russian policy for years. This was hotly denied by Berlin.

Ukraine claims crew of Moskva 'could not be saved'

A Ukrainian military official has alleged that Russia could not save the 500 men who were stationed on the Russian warship, after it was struck by a suspected Ukrainian missile.

Russia maintains it successfully evacuated the crew before the ship sank, due to a fire that severely damaged it.

Ukraine's claim cannot be independently verfied, and niether senior Pentagon officials nor Russia have given any details on possible casualties onboard the Moskva.

"A storm prevented the rescue of the ship and the evacuation of the crew,” said Natalia Goumenyuk, spokeswoman for the military command of southern Ukraine. 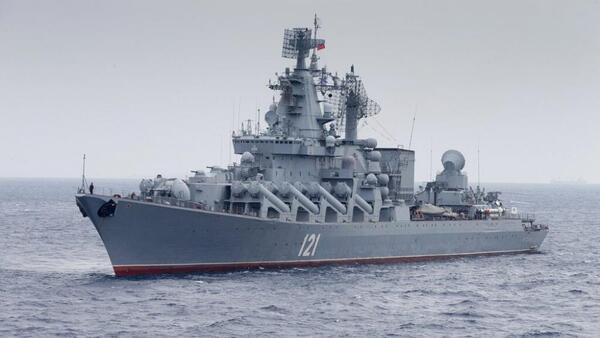 Russia promised on Friday to step up its strikes against Kyiv in response to what it calls Ukrainian "terrorist" attacks.

"We are perfectly aware that we will not be forgiven for the destruction of the Moskva and therefore this blow to Moscow's "imperial ambitions," said Natalia Goumeniouk, spokeswoman for the military command of southern Ukraine.]

“We are aware that the attacks against us will intensify, that the enemy will take revenge, that there will be missile attacks and artillery bombardments,” she continued, reporting strikes in the south, in particular the city of Mykolaiv, near Odessa.

Russia, which is still yet to confirm that a Ukrainian missile sunk the Moskva, set the tone on Friday morning, vowing to set up its attacks on Ukraine.

"The number and scale of missile strikes on Kyiv sites will increase in response to all terrorist-type attacks and sabotage carried out on Russian territory by the nationalist regime in Kyiv," the Russian Defense Ministry warned.

A stamp depicting an Ukrainian soldier giving the middle finger to the Moskva, a Russian warship that sunk Thursday, has become an instant collector's item, after a run on post offices across Ukraine saw 1 million copies sold.

At the central post office in Kyiv, hundreds of Ukrainians queued for several hours to get their hands on the postage stamp, which had sold out late Friday afternoon.

"This boat was their biggest, it was worth around 750 million dollars, they bet everything on it and we destroyed it for them," said 22-year-old Loury Kolessan, who waited two and a half hours to buy 30 stamps.

The stamp was designed by a Lviv cartoonist Boris Groh in a competition organised by La Poste, which saw more than 500 submissions.

Russia has previously said the Moskva sunk off the coast south of Odesa on Thursday after a fire on board. But a US official said Friday they believed the vessel was hit by a Ukrainian anti-ship missile.

The governor of the Kharkiv region says seven people, including a seven-month-old child, have been killed in shelling of a residential area in the city.

34 others were wounded, Oleh Sinehubov said Friday in a Telegram post.

Kharkiv, Ukraine’s second-largest city, has been shelled heavily and suffered numerous rocket attacks since the outbreak of war.

The city's location 40 kilometres (25 miles) from Russia and proximity to separatist regions in the east of Ukraine means it is a strategic target.

Military units of the breakaway Donetsk People's Republic in Ukraine have taken over parts of Mariupol, following an assault by Russian marines.

"I came here as a volunteer because I understand the situation," said Andrey, one of the fighters, to the Associated Press. "If not people like us, then who?"

The separatist said school children back in Russia had been sending him drawings.

"It's nice, you know. Lifts the spirits. If, god willing, I stay alive, I'll save these for memories," said Andrey.