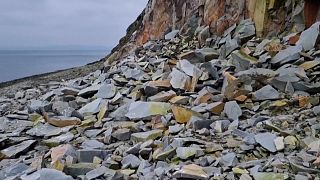 Ailsa Craig is known locally as "Paddy's Milestone" for being a resting spot across the sea between Glasgow and Belfast.

It was a haven for Catholics fleeing persecution by Protestants during the Scottish Reformation in the 16th century.

Today it is uninhabited, serving as a nature reserve for colonies of gannets, puffins and seals, which watch over the granite quarries.

It has harvested rocks intermittently since the 1924 Chamonix Olympics.

Their stones will be used at the Beijing Winter Olympics, which start with a mixed doubles event between Great Britain and Sweden on Wednesday.

Even the slightest of bumps could mean the stone slipping off course and the difference between a gold medal and bitter disappointment.

Ailsa Craig Quarry has two types of granite suitable for the sport, which are believed to have first appeared in frozen ponds and lochs in Scotland around 500 years ago.

Ailsa Craig Common Green is more resistant to heat transfer, helping it to cope better with condensation and won't shatter after contact with another stone in the game.

Durability is vital in a sport in which players slide stones across sheets of ice about 150 feet (46 metres) long towards a target area of four concentric circles.

The curlers use their brooms to sweep over ice in front of the moving stones to help them reach their intended target.