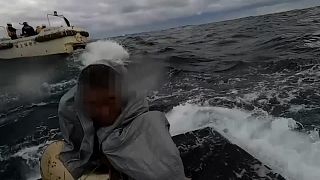 The man was the only person on board his boat, the Takamaru No. 5, when it capsized off the southern Japanese resort island of Yakushima on Saturday, the coast guard said. His name was not released.

After receiving a call from his colleagues, coast guard rescuers searched for him for nearly a day before spotting him Sunday in rough seas about 30 kilometres (18 miles) southeast of where he disappeared, the coast guard said.

The man was able to speak and was taken to hospital after rescuers brought him back to port.

It is not known what the man was doing at the time of the accident and what caused the boat to capsize.