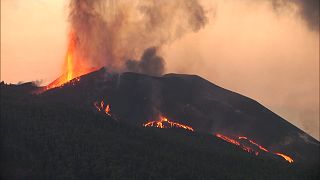 After the La Palma volcano's main cone stopped emitting lava for 30 hours, Cumbre Vieja resumed its destructive activity and presents cracks that threaten the houses in its immediate surroundings, which until now had been spared from the lava flows.

Seismic activity on La Palma yesterday broke all records since the start of the eruption, with 371 earthquakes registered.

The lava flow that is being emplaced to the north continues to be active with slight overflows in the area of Tajuya and is heading westwards, following the previous lavas, and the lava flow located to the west of Montaña de Todoque continues to occupy previously unaffected land.

With the rupture of the cone and the opening of new vents in the northern part of the main cone, the new lava flow is moving west-northwestwards, following the previous one or riding on the pre-existing one.