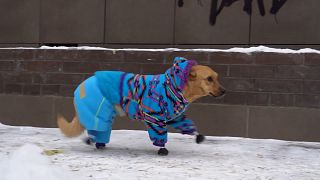 A dog in the Siberian city of Novosibirsk has been fitted with a full set of prosthetic titanium limbs, made using a 3D printer.

Monika, a rescue dog from the southern Russian region of Krasnodar, is the first dog that veterinarian Sergei Gorshkov has performed such an operation on, after previous success with cats.

The dog, aged between two and four years old, is now learning to walk again.

"We never did such a thing before," said Gorshkov.

"This is complicated, and it is a dog, which is not a cat, it weighs a lot, more than cats, and this dog had leg deformations at that. So, we considered all pros and cons, and thought that if we fail at least we will be back to where we are now."

Monika is now going through a rehabilitation process. Her new home already awaits her.

After being discharged from hospital, which should be in about four weeks, Monika will go to live in London at a shelter for cats and dogs who have been victims of violence.