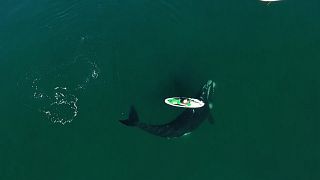 As the migration season of the Southern Right Whales gets underway in the Argentine Patagonia locals and visitors are thrilled by the curious animals coming ever closer to shore.

On Tuesday, a rare encounter was caught on video when a Southern RIght whale seemingly plays with a woman on a paddleboard and pushes the board gently forward observing its movement as it swims directly beneath it.

According to Marcos Grosso, Puerto Madryn's Tourism Secretary, more than 1,600 specimens have come near the city's shores so far.

The whale watching season in Puerto Madryn runs from May through December.