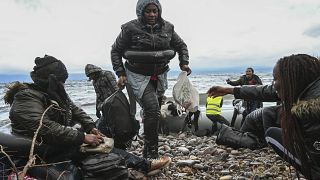 Migrants arrived on the shores of the Greek island of Lesbos in an engine-less dinghy on February 29, having been spotted and accompanied by a Greek Navy frigate in the area.

They arrived as thousands of migrants gathered at the Turkish border with Greece overnight, playing a cat-and-mouse game with Greek border patrols which try to prevent them from entering Europe.

Turkey hosts around 3.6 million Syrian refugees and under a 2016 deal with the European Union agreed to step up efforts to halt the flow of refugees to Europe.

Greek Prime Minister Kyriakos Mitsotakis said that "illegal" entries would not be tolerated while the EU said it had received "reassurances" from Ankara.

According to AFP reporters on Lesbos, two boats arrived with around 70 people on board, with many of them scrambling ashore carrying children on their backs.