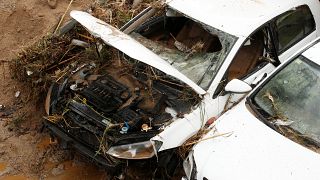 One man dies after torrential storms wreak havoc in Catalonia

At least one person has died and four others are missing after floods caused by torrential rains swept through the Spanish region of Catalonia, emergency services said on Wednesday (October 23).

Search teams found the body of a 75-year-old man who was carried away by floodwater from a swollen river as he tried to reach his car to move it in the coastal town of Arenys de Mar north of Barcelona.

His body was found at a nearby beach this morning.

Two were swept away by rising waters while in their prefabricated home in the municipality of Villaverde, near Tarragona.