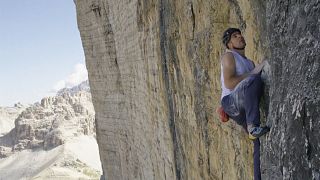 Dani Arnold set a new free solo speed record for climbing the Comici-Dimai route at Cima Grande in the Sexten Dolomites in Italy on 5th September.

The speed of his climb was all the more remarkable when you consider an experienced party takes six to seven hours to ascend this route.

Free solo climbing is the most challenging form of climbing - tackling sheer mountain faces without rope, harnesses or other protective equipment.