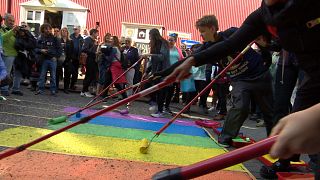 Reykjavik Pride has kicked off in Iceland, with events set to take place over the next ten days.

This is the 20th edition of the festival in the country.

The pre-opening ceremony took place in an unusual location — the Icelandic Stock Exchange.

The move was intended to bring into focus the status of LGBTQIA people in the business world.

For the fifth year in a row, a street in Reykjavik was chosen to be painted in the colours of the rainbow flag.

This time, it was Klapparstigur Street, which has been home to several gay clubs in the last few decades.

The mayor of Reykjavik, Dagur B Eggertsson, was among those who painted the street.