A passenger plane has crashed shortly after take-off on Friday from Havana's main airport, killing over 100 people, Cuban state media reported. About 114 people are thought to have been on board the aircraft, including 105 passengers and nine crew.

Images on TV and social media showed a large plume of black smoke looming above the airport where the crash happened.

But despite reports from state media, the Cuban authorities are yet to release official figures concerning the total number of casualties.

A worker at Havana's Calixto Garcia hospital told Reuters that four survivors had arrived at the hospital but one had since died from burns and other trauma. The other three remained in a serious condition.

But a hospital spokesperson also told Cuban TV that two more victims had been taken in and were being treated, which would bring up the total number of confirmed survivors to five.

A distressed relative of one of the victims told Reuters that she was "alive but very burnt and swollen".

Footage taken from the crash site shows a victim being wheeled into an ambulance as hoards of people surround their stretcher and film the chaos on their mobile phones.

NBC journalist Mary Murray, who had been at the scene, says the Boeing 737 plane crashed in a large government-owned field near a neighborhood but no homes had been touched. 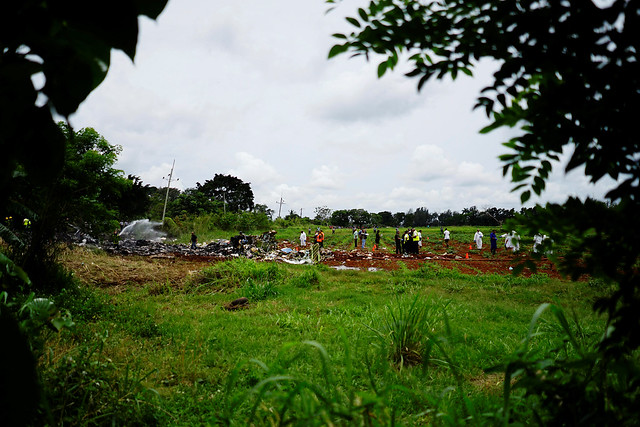 The domestic flight had departed from Jose Marti International Airport and was en route to the eastern city of Holguin when it the accident occurred, according to Cuban state-run TV.

"It crashed between the locality of Boyeros and the village of Santiago de La Vegas", it reported, referring to an area near the airport at about 20km south of Havana.

Cuban president Miguel Diaz-Canel visited the crash site and said that he feared that many people had died.

"The news is not very promising, it seems that there is a high number of victims," he was reported as saying.

He added that the fire from the crash had been put out and authorities were identifying bodies.

Cuban state newspaper Granma reported that a toddler around the age of two and four other children were on the doomed aircraft.

Boeing Commercial Airplanes, a division of The Boeing Company, said they were "closely monitoring the situation".

It is thought the plane belonged to Mexican company Damojh Aerolíneas, also known as Global Air, and was being leased to national airline Cubana de Aviación.

The craft was being operated by a foreign crew, Cuban diplomat Jose Ramon Cabanas said on Twitter. It is thought around six of them were Mexican.

The Mexican embassy in Cuba has also setup helplines in the wake of the crash, suggesting Mexican nationals were among the casualties.