All-White in the end

American snowboarder Shaun White suffered Olympic heartache in Sochi four years ago after missing out on a gold medal.

He put that demon to rest on Wednesday after putting in a virtuoso performance to win the men's halfpipe and claim his third gold medal, the most by any snowboarder.

After his run, which scored an almost perfect 97.75, White roared and celebrated with his team, tearfully hugging Olympic bronze medallist Jarret 'JJ' Thomas and young rider Toby Miller, who have been by White's side in the build-up to Pyeongchang.

Germany’s Eric Frenzel put in a powerful surge to win a gold Nordic combined — a mixture of cross-country skiing and ski jumping.

Watabe, third after the ski jumping, started the cross-country skiing brightly and had closed the gap on the leader.

Frenzel then moved clear but he could not shake off Watabe, Klapfer and Jarl Magnus Riibe on the last lap.

It took a powerful final surge by the 29-year-old German to claim a fourth Olympic medal.

Dutch speed skater Jorien ter Mors bounced back spectacularly from an injury-plagued season by claiming a gold medal in the Olympic women's 1,000 metres at the Gangneung Oval on Wednesday.

The 28-year-old set an Olympic record of one minute, 13.56 seconds to finish ahead of world record holder Nao Kodaira of Japan whose compatriot Miho Takagi took the bronze medal. 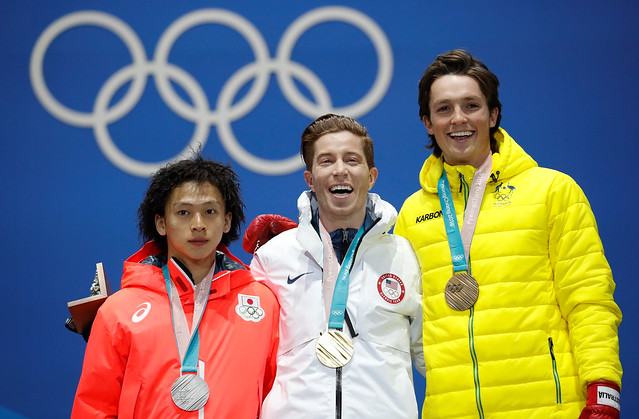 Japan’s long-running rivalry with neighbours North and South Korea spilled onto the Olympic ice on Wednesday.

It was Korea’s third straight defeat, although they scored their first goal. For Japan it was their first-ever Olympic win in women’s ice hockey.

Nordic combined, biathlon and alpine skiing events were postponed or delayed due to bad weather conditions on Wednesday.

Olympic organisers said they rejigged the competition schedule and worked to limit damage sustained around venues.

This is the most amazing day of my life! We did it? #Olympics #GoldMedal ?- @ussnowboardteam