Transparency campaigners have slammed Brussels after a 1,178-day battle to find out how much EU chiefs spend on travel.

Access Info Europe (AIE) wants to know how much Jean-Claude Juncker, Federica Mogherini and others spend on moving around for official business.

Their campaign has sent 195 information requests to Brussels but they still don’t have a clear picture of commissioners’ travel expenditure.

AIE, which has now taken the case to the European Ombudsman, say the lack of openness puts Brussels’ credibility at stake.

The European Commission says its transparency is ‘far-reaching and comprehensive’.

Andreas Pavlou, a campaigner at AIE, said: “Presented with an opportunity to show some leadership on making public spending transparent – something essential for fighting corruption and ensuring integrity of public life – the Commission has decided to hide behind minimal actions and an apparent aversion to being open with the public.”

The group first asked for EU chiefs’ travel expenses three years ago but have come up against several obstacles.

Brussels first published global figures for all commissioners, refusing to provide a breakdown for individuals.

After an appeal, they were forced to back down, but only revealed expenses for a two-month period in 2015. 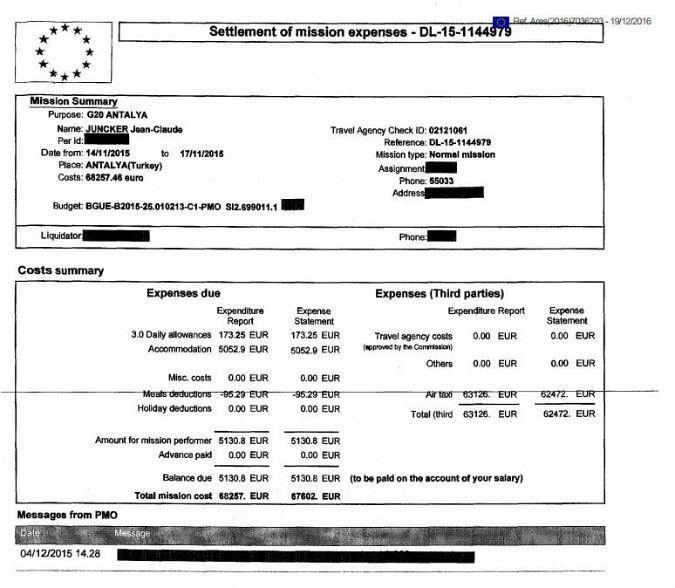 The campaign then crowdsourced to find 120 people willing to put in information requests for separate two-month periods.

The commission revealed data for January and February 2016, but rejected any greater transparency.

Yet campaigners argue these are senior, taxpayer-funded public officials whose travel costs should be made available.

“Giving only two months’ worth of expenses data is a token gesture,” said AIE’s executive director Helen Darbishire. “The commission has told us that it has had lengthy discussions about how to handle these requests over the course of the past six months. That time could have been better spent responding to the requests.

“The real cost here is not the cost of processing data but the cost of credibility of and trust in the European Commission (EC) when it refuses to publish basic information about the spending of taxpayers’ funds.”

The European Commission said in a letter to campaigners says there are limits on how much commissioners can claim in travel expenses.

It wrote: “All Commission expenses are controlled internally. They are also subject to external scrutiny by the Court of Auditors and in the framework of the discharge procedure, the results of which are public.

“Communication and transparency are priorities for the Commission. However, given the overall oversight procedures in place, the Commission does not see added value in publishing online the detailed travel expenses for every mission by every Member of the Commission as your letter requests, and considers that the resource costs of processing the data to make them available on the Europa website would be disproportionate.”

Your view What do you think? Is Brussels justified in blocking access to this data? Let me know: chris.harris@euronews.com