Corbyn calls on May to quit

Labour leader Jeremy Corbyn called on Prime minister Theresa May to quit after “she had lost her mandate”. Theresa May said her duty, as the leader of the party set to win the most seats in the election, was to oversee a period of stability for the country. Conservative party is expected to have 318 seats in the new UK parliament, eight seats short of a 326 seats majority necessary to form a government.

Jeremy Corbyn calls on Theresa May “to go, actually.” https://t.co/QMFCGvs6Yapic.twitter.com/MspL9C3qud

No landslide for May

Results of the vote count are coming in largely supporting exit polls which suggested Conservative party had failed to secure a landslide victory. May had called a snap election to strengthen her mandate. Labour might pick up 261 vote with the Scottish Nationalists claiming 32 and Liberal Democrats 13 seats.

After winning his own seat in Islington, London, Labour leader Jeremy Corbyn hailed a vote against the politics of austerity and cuts to public services. The public had expressed their desire to give young people a chance and had “changed politics”, he added.

The Scotland National Party (SNP) has lost at least 19 seats to Labour, Liberal Democrats and – more surprisingly – Conservatives in Midlothian, Dunbartonshire, Angus and other constituencies. These results mean a second independence referendum is no longer a foregone conclusion. Former leader Alex Salmond suffered one of the biggest shocks of the night. Salmond lost his seat to the Conservatives’ Colin Clark

In another shock result a former Liberal Democrat leader and ex-deputy Prime minister Nick Clegg lost his seat in a Sheffield constituency. He thanked the voters for supporting him before, saying it had been a privilege to represent them for 12 previous years.

In several London constituencies it is payback time for the Conservatives – anti-Brexit voters take revenge and support Labour candidates. In Putney a Conservative candidate wins with a majority of only 100 votes.

What this election taught us so far?

1. Young British voters, the so-called “millennials”, seem to have played a major part in the outcome of this election, both in terms of turnout and in terms of supporting the Labour party. Jeremy Corbyn has conducted a highly inspired campaign encouraging many young people to vote.

2. “Perfect is the enemy of good” – Theresa May may have to agree with Voltaire if exit polls prove to be correct in predicting the result of this vote accurately. Prime minister took a gamble in calling the snap elections in order to strengthen her mandate: instead she may end up weaker than before and lose the overall majority in parliament.

3. Liberal Democrats who are predicted to gain 13 seats in the House of Commons may become the belle of the ball in the coming days and weeks while Conservatives (who are predicted to land 318) seek an alliance with them in order to form a government – a majority of 326 is needed to complete the job.

4. Britain chose to maintain its two-party system as Labour and Conservatives claim the majority of seats in parliament. UK voters seem to be unwilling to entrust their future into the hands of political novices the way French voters did earlier this year having elected president Emmanuel Macron.

5. United Kingdom Independence Party has failed to reclaim a mandate after UKIP leader Paul Nuttall lost the election. Nigel Farage said he may need to reclaim his position as a leader of the far-right party.

6. No second Scottish referendum? After surprise losses by the Scottish National Party and gains by Labour and the Conservatives chances of SNP calling another independence referendum look less certain.

7. There are many uncertainties facing the new parliament but one thing is for sure: it is going to contain a record high number of women MPs – 192.

8. And dogs are officially the new cats! Dogs in polling stations have become a social media sensation: 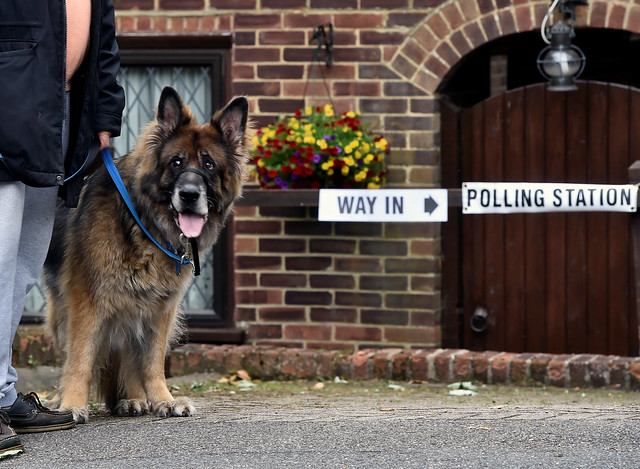 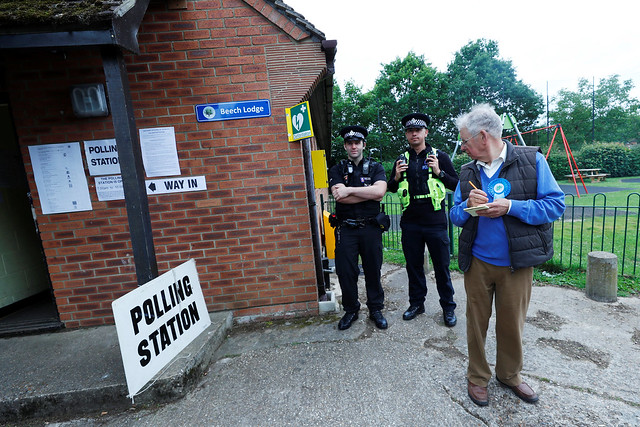 How does voting work?

The United Kingdom’s general election saw more than 3,000 candidates contesting 650 seats in the Houses of Parliament. About 46.9 million people were registered to vote at more than 40,000 polling stations across the country.

Elections are decided by a first-past-the-post system. The candidates with the highest votes in each area becomes an MP. All other votes are discounted. Voters can only choose their local MP and not whom they wish to be the Prime Minister. Each local area sends one MP to the House of Commons. Usually the party with the most number of seats wins. If no party wins a majority, a situation arises which is known as a hung parliament. Then the largest party may form a minority government or a coalition with two or more parties.