Twenty-seven years after his death, Filipino dictator Ferdinand Marcos has been buried at Manila’s prestigious Cemetery of Heroes.

Marcos died in 1989, three years after his regime was toppled by the “‘people power’ revolution”: http://www.straitstimes.com/asia/se-asia/with-heros-burial-for-ferdinand-marcos-duterte-endorses-philippines-authoritarian-past and since 1993, his embalmed body has been kept in a glass casket in his home province.

But thanks to current President Rodrigo Duterte, the former leader has now been laid to rest, with a simple service, which included a 21-gun salute.

The body was moved in secrecy though, after the nation’s Supreme Court gave the go-ahead for his burial last week. President Duterte is said to have encouraged the decision. Duterte had promised his predecessor would receive a hero’s burial during his Presidential campaign, hoping the move would “heal the nation”: http://www.straitstimes.com/asia/se-asia/with-heros-burial-for-ferdinand-marcos-duterte-endorses-philippines-authoritarian-past

But Marcos was far from universally popular.

He ruled the Philippines from 1965 to 1986, and imposed martial law for almost half of that time. It is believed that his government was responsible for the deaths of at least 3,000 political opponents, and the torture of many more. He is also accused of stealing approximately €10bn from the nation, which was used to ensure the dictator and his family continued to live a life of luxury and excess after they fled in 1986.

His burial in “Libingan ng mga Bayani”: http://corregidorisland.com/bayani/libingan.html has been described as a “‘sneaky’ manoeuvre”: http://www.nytimes.com/2016/11/19/world/asia/philippines-marcos-burial.html?smid=tw-nytimesworld&smtyp=cur by opponents.

It is perhaps unsurprising that it is President Duterte that has sanctioned this divisive move. Since taking office, he has “offended many”: http://www.euronews.com/2016/09/05/what-did-rodrigo-duterte-call-barack-obama , and begun a bloody campaign against the nation’s drug dealers and addicts. He even “compared himself to Adolf Hitler”: http://www.euronews.com/2016/09/30/philippines-president-likens-himself-to-hitler-wants-to-kill-3-million-drug .

Duterte reportedly sees Marcos as his hero, and his father served in Marcos’ cabinet.

Pictures from the funeral and subsequent protests can be seen here: 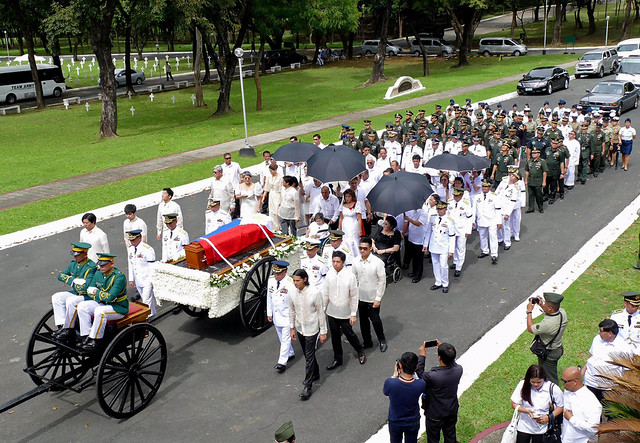