‘We all want what’s best for this country’

Outgoing president, Barack Obama, has instructed his team to help make the transition of power as smooth as possible for Donald Trump. He cited the way he was treated eight years ago by George W Bush and his team as an example of good practice.

He said everyone was rooting for Trump’s success and called for respect for US institutions and rule of law.

“This was a long and hard-fought campaign,” he continued. “A lot of Americans are exultant today, a lot are less so.”

Standing with Vice President Joe Biden by his side, he urged young people to remain encouraged and not to become cynical, echoing Hillary Clinton’s words just ahead of his speech.

“Good faith is essential to a vibrant and functioning democracy. […] It’s how we have come this far,” he said.

“I look at this job as being a relay runner. […] Hopefully by the time you hand it off, you’re a little further ahead, you’ve made a little progress.”

“Ultimately, we are all on the same team,” he concluded, perhaps a nod to claims that America is more divided than was initially realised.

Clinton offers her services to Trump

Hillary Clinton made an emotional speech in New York, in which she acknowledged her defeat in the race of her life was “painful.”

She publically conceded the presidency and admitted she had since offered to work with President-Elect Donald Trump.

“Last night, I congratulated Donald Trump and offered to work with him on behalf of our country,” she told supporters and staff at a Manhattan hotel.

“I hope that he will be a successful president for all Americans.”

As he celebrated victory, Donald Trump vowed to heal the wounds of what’s been described as one of the dirtiest presidential campaigns in American history.

“It is time for us to come together as one united people,” he told an audience of supporters in New York.

After revealing Hillary Clinton had called him to concede, he paid a rare tribute to his rival, acknowledging: “This political stuff is nasty and it is tough.”

In a speech designed to allay fears he promised to reach out to those who had not given him his vote and expressed a wish to work with “other nations who are willing to get along with us.”

Significantly, he did not mention immigration, nor a proposed wall on the Mexican border which had featured heavily in his campaigning.

Nevertheless, markets around the world tumbled through the night as the result emerged. The Mexican Peso dropped to record lows on concerns about the impact on cross-border trade.

And it wasn’t just traders who were reeling. Democrats had been assured by pollsters that their candidate was a sure fire winner.

Things started to go wrong for them around 3am CET, however, as Trump claimed the key swing state of Ohio, followed shortly afterwards by the even more significant Florida. 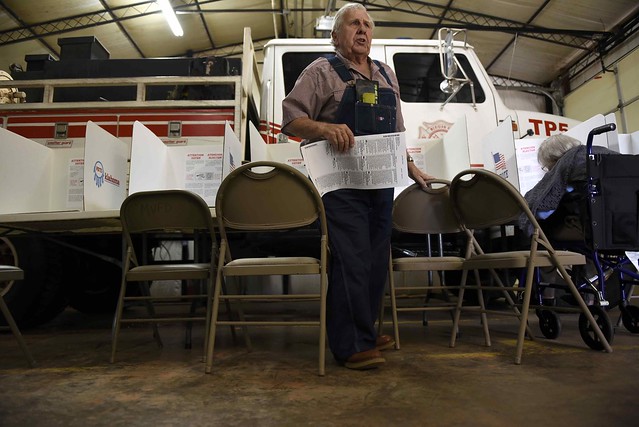 A rejection of the establishment

Donald Trump’s victory comes after an especially bitter campaign that has further polarised an already deeply divided nation, and is widely seen as a powerful rejection of the establishment – an administration represented not only by Mrs Clinton, but also outgoing president Barack Obama.

Analysts also widely view the result as a reaction by America’s mostly blue-collar white and working-class voters, many of whom no longer feel heard by the country’s elites and feel they are paying the price for decades of globalisation and multiculturalism.

The man many have voted for is an outsider. The fact that Mr Trump has no political experience is a plus for many of his supporters, who are hoping he will bring a breath of fresh air to what they see as America’s stale political landscape.

Bolstered by Mr Trump’s strong showing, Republicans retained control of the Senate, with just one Republican-controlled seat – in Illinois – falling to Democrats early in the evening.

As the result was announced, Vladimir Putin congratulated Donald Trump on his victory in a telegram.

The Russian president expressed “hope for joint work to restore Russian-American relations from their state of crisis, and also to address pressing international issues and search for effective responses to challenges concerning global security”, according to the Kremlin.

The Kremlin added that Putin also said he was sure a constructive dialogue between Moscow and Washington would serve the interested of both countries.

British Prime Minister Theresa May congratulated Donald Trump on winning the presidency, saying Britain and the United States would remain “strong and close partners on trade, security and defence”. Foreign secretary Boris Johnson tweeted: “I believe passionately in the importance of the UK-US relationship and am confident we can take it forward together.”

In France, President Francois Hollande congratulated Trump on his victory, but warned the result would open up a period of uncertainty. France would be vigilant and frank in its talks with the new administration on international issues, he said, adding that Trump’s victory showed that France needed to be stronger and that Europe needed to be united.

Far-right National Front party leader Marine Le Pen was also swift to react: “Congratulations to the new president of the United States Donald Trump and to the free American people!” she tweeted. According to opinion polls, Le Pen is likely to win the first round of France’s presidential elections next year, but would lose in the second round.

German chancellor Angela Merkel joined Hollande in congratulating Trump and offered to work closely with him on the basis of the values of democracy, freedom, respect for the law and for the dignity of people. Foreign minister Frank-Walter Steinmeier said that Donald Trump’s victory was not what most Germans had wanted and added that Washington’s foreign policy would no longer be as foreseeable as it had been.

“The result is not the be underestimated. It is different to what most people in Germany desired but, of course, we have to accept it,” said Steinmeier.

In Hungary, hard-line Prime Minister Viktor Orbán sent a message of support to Trump via Facebook that read: “Congratulations. What a great news. Democracy is still alive.”

And in the Netherlands, populist leader Geert Wilders, leader of the Party for Freedom, welcomed Trump’s victory, saying “politics in the West will never be the same after today”, adding that “Trump’s victory will be an enormous stimulus for parties like mine.”

Reactions around the world

In what Donald Trump described as the first international call he received to congratulate him on winning the election, Egyptian president Fattah al-Sisi spoke to him on the telephone early Wednesday morning, saying he was keen to foster closer diplomatic ties.

There was muted reaction from Indonesia, which has the world’s largest Muslim population. Donald Trump’s victory may create fresh tension between the US and the Islamic world, warned an official at Indonesia’s top Muslim clerical body. Trump had made “negative, cynical” comments about Muslims in the past, Din Syamsuddin, a senior official at the Ulema Council told reporters in Jakarta.

One of Trump’s propositions during the campaign was a ban on Muslims entering the United States.