1. What does the Olympic Flame represent?

The Olympic Flame, along with the five rings the most recognisable symbol of the Olympic Games, represents the positive values that Man has always associated with fire. It is also a link between the Ancient and Modern Games and underlines the profound connection between these two events.
According to the Ancient Myth of Prometheus, who stole the power of fire from the Zeus, fire is the symbol of life, rationalism and freedom as well as inventiveness and was symbolised by the ageless flame that used to burn on the Altar of Prytaneion in Ancient Olympia throughout the celebration of the Ancient Olympics. It’s the place where the flame for the Modern Olympics is being lit. 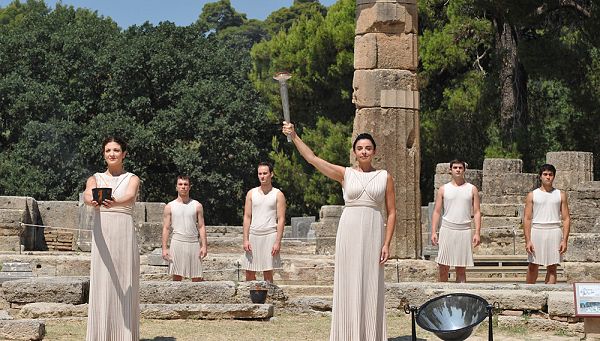 2. Have the Modern Olympics always had the flame?

No. There was no Olympic Flame in the first modern Olympic Games, held in 1896 in Athens, and it wasn’t until 1928 in Amsterdam that the Olympic Flame was introduced for the first time. But in 1928 there was no ceremony in Ancient Olympia; the flame was just lit in Amsterdam.
The present ceremony in Ancient Olympia for the lighting of the Olympic flame, and the Olympic Torch Relay that follows, happened for the first time in 1936 for the Games held in Berlin. Many historians believe Hitler’s Third Reich introduced the relay as a propaganda stunt to publicise the Games.
There were never any relays held at the ancient Olympics. However, in Athens and other cities of Ancient Greece there were torch races (Lampadedromia) held in honour of certain gods, including Prometheus.

3. What is the ritual of the Lighting of the Olympic Flame?

The ritual of the Lighting of the Flame starts from the Altar of Hera, in front of the goddess’s temple (Heraion), which is opposite to the Temple of Zeus, at the archaeological site of Olympia.
The ceremony begins with the procession of the priestesses, all under the supervision of the High Priestess. Dressed in archaic-style clothing, priestesses surround the Altar.
Then, the High Priestess calls the Sun God Apollo to light the torch using a concave mirror to focus the sun’s rays. The High Priestess then says a prayer to Apollo and Zeus.
When the flame lights, the High Priestess relays the flame in a small ceramic pot and heads to the Panathinaiko Stadium with all priestesses in procession.
They pass by the Olive Tree, where they stand for a moment and “Amphithalis Pais”, the young boy (both of whose parents are alive) cuts off an olive branch, as a symbol of peace and a meaningful winner’s prize.
When the procession arrives at the Stadium, the High Priestess lights the torch of the first runner and the torch relay begins.

4. What if there’s no sunshine to light the torch?

As a precaution, on a sunny rehearsal day before the official ceremony, a flame is lit according to the traditional method. This flame is kept in reserve. So, even if the sun is not out on the day of the official ceremony, the torch can be lit from this flame, which is kept in a security lamp.
The last time the sun did not shine and the flame from the security lamp was used was in the ceremony for the Sydney Olympic Games in 2000. This was also the case for the 1956 Melbourne Olympic Games.
In 2008, the timetable was changed at the very last minute because storms were forecast in Ancient Olympia. The bad weather arrived only a few minutes after the lighting for the Beijing Games was complete.

5. Who is the High Priestess and how does she get the job?

6. What happens if the flame goes out?

Once lit, the flame continues to burn throughout the duration of the Olympic Games, until the day of the closing ceremony, when it is finally put out. Once the flame is extinguished, the Games are past and become History.
It is not uncommon for the Olympic Flame to be accidentally or deliberately extinguished, especially during the course of the relay, but even sometimes in the cauldron during the Games themselves. That’s why multiple copies of the flame are transported with the relay or maintained in backup locations. If a torch goes out, it is re-lit from one of the backup sources.

Maybe the most memorable unscheduled extinguishing occurred during the 1976 Summer Olympic Games, held in Montreal, Canada. After a rainstorm doused the Olympic flame, an official re-lit the flame using his cigarette lighter! Organisers quickly doused it again and re-lit it using a backup of the original flame. 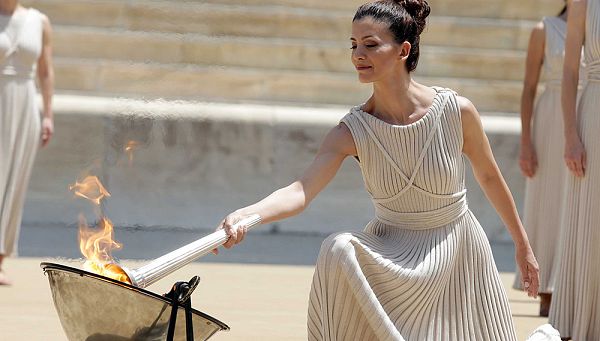 7. What are the strangest places the Olympic Flame has passed?

The highest point at which the Olympic flame has passed is the summit of Mount Everest, during the Torch Relay for the 2008 Beijing Games.
It has also gone through the North Pole in the last relay, for the 2014 Winter Games in Sochi. In the same relay, the Olympic flame has been carried underwater in Lake Baikal – the world’s deepest lake. This was not the first time the flame was underwater. A diver carried the flame under water at the Great Barrier Reef (Sydney 2000).
For the 2006 Turin Winter Olympic Games the flame was transferred from a gondolier in Venice. In 1956 for the Melbourne Games, the flame was transported to Stockholm in Sweden, where the equestrian events were held, travelling only by… horse. Horses played a special role again as a part of the 1996 Torch Relay (Atlanta). This time horses were replaced by… camels when the flame crossed the Australian desert (Sydney 2000).
Also, during the 1996 Torch Relay, the flame travelled in an Indian canoe, on a Mississippi steamboat and on a wagon of the Union Pacific, the first transcontinental railroad (Atlanta).
The wonders of technology were highlighted in 1976 when the Canadians organised the transmission of the flame by satellite between Athens and Ottawa for the Montreal Olympic Games.
Finally, three times the torch (but not the flame) was carried into space by astronauts (Atlanta 1996, Sydney 2000 and Sochi 2014). 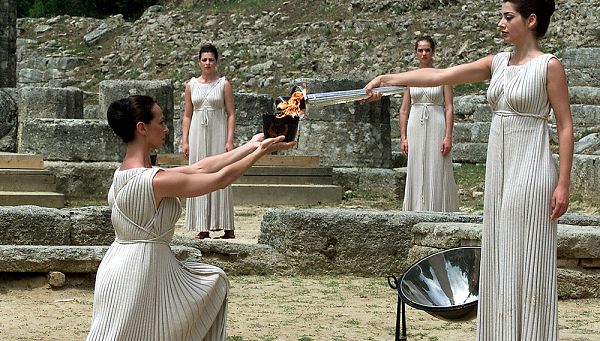